Join us Sunday 23rd July when three of our printmakers will be demonstrating different printmaking techniques between 12pm and 3pm, outside the gallery on Ealing Green. This is a wonderful opportunity to see three leading British artists in action and get an understanding of printmaking; from the design, making of the plates or cutting of the lino, inking-up and then using the presses to print a small edition. There will also be an opportunities to get your own fingers inky too! The afternoon promises to be a wonderful experience exploring the creative process, discovering what is involved in printmaking and what makes it unique. The event is being held as part of the Make It Ealing Festival.

During the afternoon we will also be hosting a book signing between 12pm and 3pm by Rupert Truman who collaborated with Storm Thorgerson at StormStudios where they created some of the most iconic album covers of all time including Pink Floyd’s Dark Side Of The Moon. Many of these images form part of our current exhibition of Storm Thorgerson’s work. 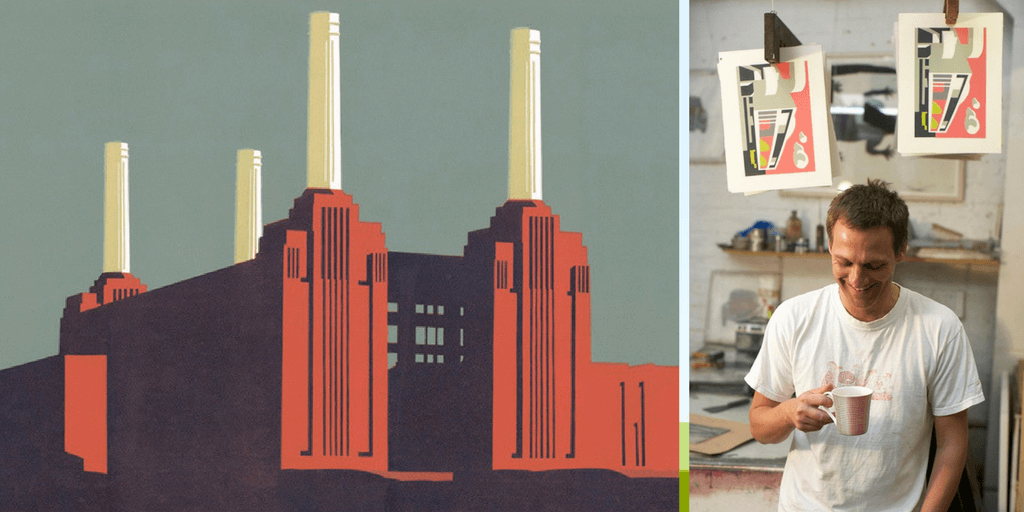 Paul Catherall is a London-based printmaker and illustrator. From the late 1990s he has worked predominantly in linocuts. His prints beautifully reconstructed urban landscapes and architectural details. They build up seemingly abstract blocks of colour into perfectly balanced compositions, which unite as one representational whole. His work has featured on posters and book covers for British Airways, Marks & Spencer, Bloomsbury and Harper Collins.

Combining an expert eye for composition and colour with consummate draughtsmanship,  Paul Catherall creates beautiful prints entirely by hand in a painstaking relief process that takes several weeks to complete. “Printing by hand is very important to me – you become so involved that you really care about the print and put every effort into it working. I love the fact that the lino process is methodical but different at each stage – you can be adventurous and free with the initial sketches, then it requires a great deal of concentration and general blood, sweat and tears to create the finished composition. The carving is quite therapeutic and the printing is a combination of both, with a physical aspect thrown in so you feel like you’ve done real work…” 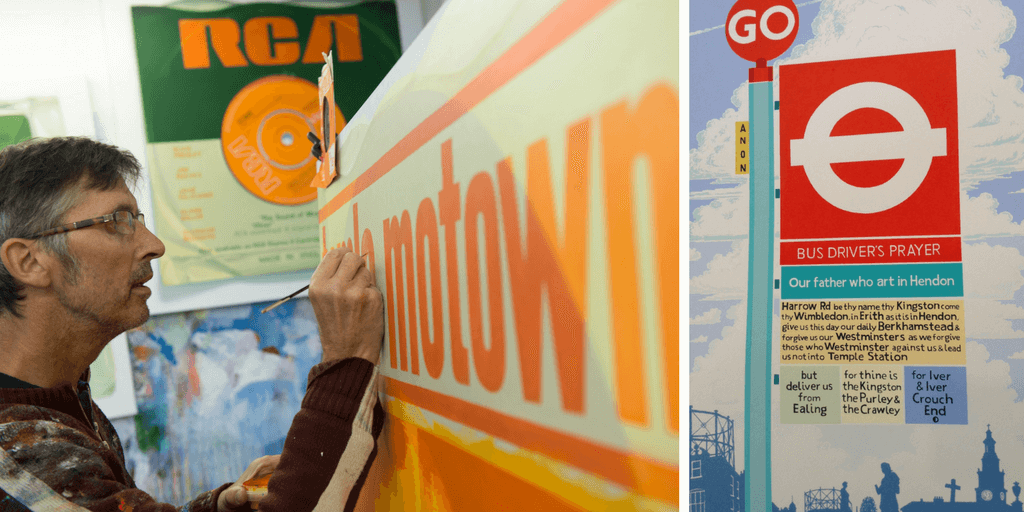 An artist whose playful narrative runs throughout his work, Martin Grover’s strengths lie in observation and anecdote. His work captures and recalls childhood recollections, minor street incidents and states of mind. He has screen prints in the collections of The Victoria and Albert Museum.

“Ever since sixth form I’ve been screen-printing. I always loved the process; to me I am still painting because I paint directly onto the screen, I don’t use any photographic processes, so it’s the same as a canvas. I have developed from very simple screen prints where I didn’t want to replicate a whole painting, to now where I am replicating paintings in print. It is great, but they take as long as a painting. The idea originally was to do something a bit quicker and in a different style. That’s what I love about it, I’m still learning.

I love the excitement when I print a colour, you can’t imagine what it’s going to look like. With a painting you can go anywhere and it can take months. With a print you have a start and a finish and a more linear path.” 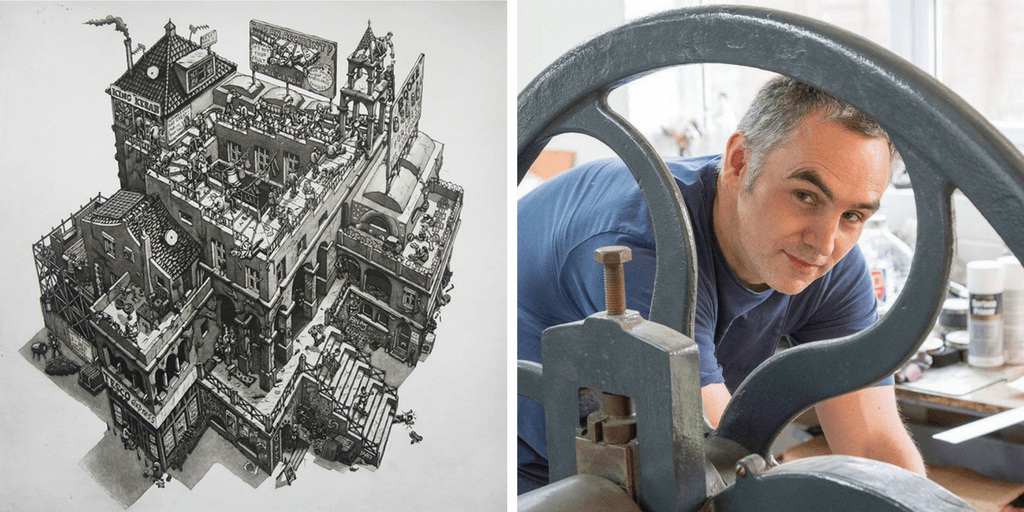 Martin Langford was introduced to the traditional printmaking technique of mezzotint by the late David Gluck RE when he did a post graduate in Advanced Printmaking at Central St Martin’s College of Art.

“I didn’t set out to be an environmental artist or to create artwork relating to social commentary but as my portfolio developed and people started to review my work, the descriptions started to emerge and I began to notice a pattern I hadn’t intended but am now please with. My work tends to focus on the environment, the evolution of man and his material wealth, the development of bigger and bigger cities, more and more people, cars and industry on the planet and the consequences this has on nature. Some reviews have labelled my work as ´black humour´ but I always try to depict a positive message too – the persistence of nature in recapturing what once belonged to the earth.

I began mezzotint engraving as David Gluck dared me into a “try this for size” challenge. It’s a technique that you can constantly learn from and develop. Although the preparation is laborious I enjoy the fact that a certain level of craftsmanship is required to achieve a good result even efore the image is worked onto the copper plate. I also love the tonal variations and effects that can be used using this technique.  Although I spent around 9 years working only mezzotints I now mostly make etchings and very occasionally will do a lino cut, depending on the image.”