Sir Peter Blake has always been a popular artist at For Arts Sake and was one of the first artists that we exhibited when we opened the gallery.  Peter Blake is a the leading figure in the art world and is often referred to as the Godfather of British Pop Art. Best known for the iconic album cover he produced for the Beatles Sergeant Peppers Lonely Hearts Club Band, Blake’s work is inspired by his love affair with icons and the ephemera of popular culture. We’re delighted to now have two of his more recent prints, Gettin’ In Over My Head and Manhattan Boogie Woogie, available for sale in the gallery.

Gettin’ In Over My Head is a beautiful silk screen print of Peter Blake’s album cover for Brian Wilsons’ seventh solo album. The work combines Blake’s skills as a creator of album artwork with his well-documented personal passion for the music of Brian Wilson. The Beach Boys are one of Peter Blake’s favourite pop bands and he has produced various artworks for Brian Wilson over the years. This image features a collage of Wilson against a movie set-like 1950s version of an American city. Blake has created an album montage inspired by each of the tracks on the album and hand-written the name of the track next to it. His choice of imagery highlights the diversity of his visual influences from sentimental Victorian angels and pop art geometric stripes to mediaeval knights and Gatsby-like eyes watching over the scene. 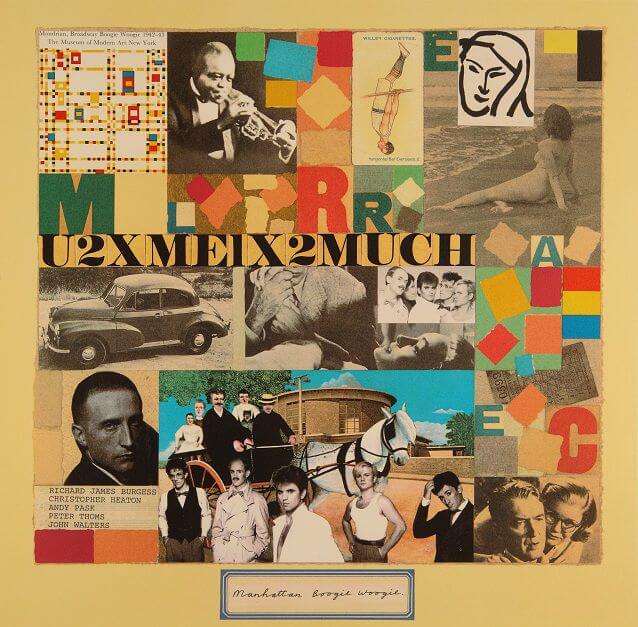 Manhattan Boogie Woogie is a silkscreen print of the album cover artwork created for the band Landscape.  Blake’s imagery for the album cover is inspired by the timescape when the popularity of boogie woogie music was at its height in the 1930s and 40s, especially the visual culture of the time. In the top left corner Blake includes an image of Piet Mondrian’s painting Broadway Boogie Woogie from 1942-3 (the last painting Mondrian ever made). As well as Mondrian, Manhattan Boogie Woogie references the work of Matisse, both in the colourful use of collage-like paper cut squares, and the inclusion of a black and white study by the artist. Alongside these artistic giants, Blake includes popular culture stars Jimmy Stewart and Louis Armstrong, as well as images of the band members of Landscape themselves. The letters and numbers U2XME1X2MUCH in the centre of the work stand for ‘You two-timed me one time too much’; the name of the EP Landscape later released.

Both prints are available at our Ealing gallery for £1,200 or via the website here.