An exhibition of prints by renowned linocut artist, Paul Catherall.

Many people will have seen a Paul Catherall artwork without realising they have. Transport for London has a long history of commissioning artists to design their posters and over the years Catherall’s designs have adorned many tube platforms and bus stops. Now you have a chance to see the original prints in an exhibition at our gallery in Ealing. Included in the exhibition will be the artwork used for his latest set of posters which have been released as part of the #LondonIsOpen campaign currently on display across London’s underground, which explore the view of the City behind Blackfriars Bridge looking East. Each poster features a prominent London landmark and as a group the posters form a continuous image, as seen in the original prints on display in this exhibition.

“It was such an honour to be commissioned again by TFL for the recently released #LondonIsOpen poster set. It was a bit of a challenge as I was asked to create a single London cityscape, featuring as many new landmarks as possible, which could be divided equally into four separate poster compositions. They also wanted four different colourways ,with the London Overground orange included in each one. A pretty specific brief!

The tricky aspect was finding a view that answered the brief with as little ‘artistic licence’ as possible. I settled on the view of the City behind Blackfriars Bridge looking east – basically a revisit of the view from my Four Seasons set from ten years ago. The City has had a few additions since 2006 – from my point of view spoiling the balance of the skyline – but it was a good challenge for me to tackle new architecture like the Walkie Talkie, which I’m not massively fond of.

It’s always a thrill to see the posters up on the system and I’m chuffed they are up. Although sometimes it’s difficult to appreciate them – you can’t help but ‘work’ on them visually. I suppose the refinement never stops. It’s probably why I don’t have my prints up at home…” 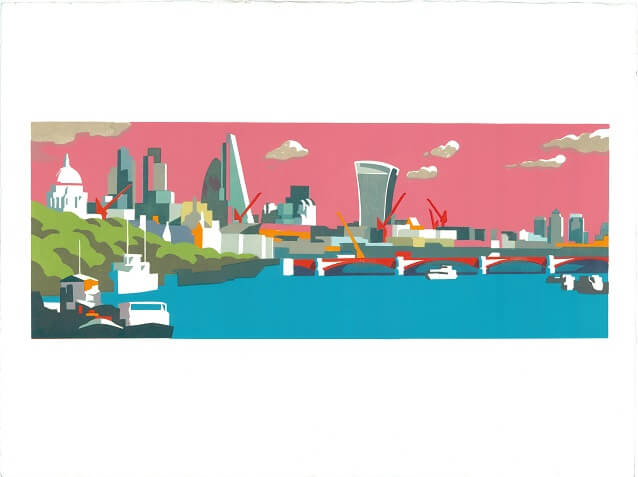 Over the years Paul Catherall has become well known for his pared down versions of famous London landmarks such as Battersea Power Station, The Oxo Tower and Tate Modern. We’re delighted to announce that For Arts Sake gallery will be launching a new work at this exhibition; a print which pays tribute to the Hoover Building in West London, one of London’s finest Art Deco designs. This remarkable landmark is a highlight of many people’s journey in and out of London, including Paul Catherall.

This Grade II listed, former factory was built in the 1920s for The Hoover Company and is now in the process of being transformed into luxury apartments, a transformation perhaps predicted by Elvis Costello in his 1980s song:

“Five miles out of London on the Western Avenue

Talkin’ ’bout the splendour of the Hoover factory

And one of these days the Hoover factory

Is gonna be all the rage in those fashionable pages”

Paul Catherall spoke to us about he approached the print: “I’ve always admired the building – I drive past it fairly regularly on my way to visit my in-laws and parents and it looms like a gleaming white Art Deco palace on the dreary A40. I was slightly put off by the large Tesco signage, so it basically stayed on my long list, but then I thought the forthcoming exhibition was a good opportunity to revisit it, as it’s relatively local.

Though brutalist architecture is my favourite/go-to subject matter, Art Deco is not too different in the way I tackle it. There are always bold lines and silhouettes and although it may be decorative it is never too detailed. It’s always good to use strong white shapes in a linocut for the other colours to contrast against and be enhanced by, so  the Hoover building actually ended up being perfect subject matter for me.

The choice of background colour usually springs to mind either just before or during sketching out the composition and is partly subconscious – some colours just seem to fit with certain buildings. For example, I can’t help but think of magenta for the National Theatre. With the small Hoover print I thought extending the red from the linear decoration would make a quite striking image against the grey, white and eau de nil of the building. While printing the proofs I tried a grey backdrop and thought that would make an atmospheric and graphic backdrop for the larger print.”

Combining an expert eye for composition and colour with consummate draughtsmanship Paul Catherall creates prints entirely by hand in a painstaking process that takes several weeks to complete. For Arts Sake Gallery is delighted to be bringing a range of his work, including depictions of other London landmarks, to Ealing giving people a chance to see the care and attention that goes into Paul’s work.

The exhibition is free to enter with all works available to buy. The exhibition will run for one month, from Friday 28th April and will present over 50 original works.

There will also be a competition running on Facebook, for the opportunity to win a rare artists proof of Paul Catherall’s Hoover Building print in a pink colour way that will not be available anywhere else. Follow our Facebook page here where we will be sharing more information.

Paul Catherall is a London-based printmaker and illustrator. From the late 1990s he has worked predominantly in linocuts. His prints beautifully reconstruct urban landscapes and architectural details. They build up seemingly abstract blocks of colour into perfectly balanced compositions, which unite as one representational whole. Cezanne and Sickert have been a recurrent influence on his use of colour and construction of form. He also greatly admires the progressive commercial designers of the 1920s and 1930s, particularly Edward Mcknight Kauffer and Tom Purvis. His work has featured on posters and book covers for British Airways, Marks & Spencer, Bloomsbury and Harper Collins.

To see other prints available by Paul Catherall, visit our page here.