Muses, Maps and Myths is our September exhibition and will feature a wide range of paintings and prints by highly acclaimed artist, Mychael Barratt.  The exhibition will include a collection of paintings and prints from his new publication The Master’s Muse – Artists’ Cats and Dogs (which will be launched at the exhibition), his painting of the Mile End Mural commissioned during the Olympics 2012, all three of Mychael’s big maps and an array of various London based prints, including his Notes On The Underground series and a new piece inspired by Ealing. Mychael is a painter and printmaker whose detailed work is often as narrative as it is visual and is one of our most popular and captivating artists. Back in July we spoke to Mychael about the upcoming exhibition and he told us a bit about what people can expect to see.

The exhibition is titled ‘Muses, Maps and Myths’, reflecting the range of topics that interest you as an artist.  The range of subjects that you capture is very broad, but what seems to connect it all is a love of storytelling; how important are narratives and words to you?

Narratives are hugely important to me. I have always admired the art of storytelling and the visual artists that first inspired me were children’s book illustrators like Arthur Rackham and Edmund Dulac. I love the interaction that narrative art creates as the viewer tries to fathom both the content and the artist’s motivation. I don’t like explanations to be too explicit but the beauty of printmaking is that the titles are generally written below the piece giving crucial clues about the narrative to the viewer.

Painter, printmaker and cartographer; your work is varied to say the least!  What can we expect to see in this exhibition?

Amongst the things you will see will be all of the ‘maps’ I have created, three of which have found their way into the permanent collection of maps at the British Library. There will be a large number of paintings including the one that was the prototype for the Mile End Mural in the East End of London and also the largest collection of ‘Artists’ Dogs and Cats’ that I have ever shown. There will also be a number of prints in various media that I’ve been making over the last few years and my most recent paintings such as Dream House, a portrait of Pitzhanger Manor in Ealing.

Much of your work focusses around London; as a location along with the history of the place. Would it be fair to say that since you moved from Canada to London the city has become your muse?

The plan was to be in London for two weeks but from the moment I arrived I was struck by what a fantastic, mercurial and captivating city this is. It has definitely become my muse either as the subject for my narratives or by providing me with endlessly fascinating backdrops.

Much of your work is extremely detailed both in research and in execution, prime examples including ‘Notes From The Underground’ and ‘A London Map of Days’. How much of your time is spent on research vs the actual printmaking and where do you conduct your research?

The research has become an increasingly absorbing aspect of my work. For the large maps I gently pursue references for months before I even pick up a pencil to start to draw. Even while I am busily working away on other projects there is a constant stream of gentle research going on in the background.

Twelve colour etchings, counter-proofing, combining multiple techniques in one print, writing a book about Intaglio Printmaking ….there are so many interesting techniques in your work. Can you tell us a bit about them and what drives you to continually try something new?

The driver for all of my exploration of new techniques has been the desire to recreate the images I have of each new piece in my head. When my current repertoire of techniques is not appropriate for the next project then I learn a new one. It’s been wonderfully educational.

There are many threads and layers in your work; people can respond to your work emotionally as a visual piece of art but also intellectually or even just through the humorous touches – how important is this balance?

I love the different layers of connection that can be made with my work. Some people have contacted me to try to understand every nuance of my motivation and others have happily owned pieces for years without realising that there was a narrative or an allusion. More than once people have approached me to say that they’ve only just ‘got’ a piece of mine that they’ve owned for years.

You worked with Mark Rylance when he was the Artistic Director at The Globe.  How did this come about and what was he like to work with?

Mark Rylance was the artistic director of Shakespeare’s Globe throughout the time that I worked with them and everything I did was shown to him for approval before it made its way onto the shop floor but I actually only met him once. He’s one of my favourite actors and I’ve seen him on stage in every play he ever did at The Globe.

You continue to have an interest in Shakespeare and we understand that you are currently working on a new piece – can you tell us a bit about this? Did you study Shakespeare at school and what is about his work that appeals?

I am currently working on two pieces to celebrate the 400th anniversary of Shakespeare’s death. Both are going to be peppered with references to Shakespeare’s 37 plays and will provide lovers of the bard’s work with hours of exploration. One will be a detailed map and the other a deceptively simple image. I did study Shakespeare at school but I think that my real fascination came once I arrived in London and walked around Bankside.

We think it’s fair to say that as an artist you’re not intimidated by size.  Your work ranges from the small and intimate to 1 metre wide prints and even to a 10 metre high mural on the Mile End Road. How do you decide what size to work to and do you have a preference?

Every work has an ideal size and scale and I think about the eventual dimensions very carefully. I occasionally get it wrong but it’s never through a lack of consideration. The mural was a wonderful project where the scale was established by the size of the wall. As I’m afraid of heights it wasn’t my favourite prospect but I got over the fear and would be delighted to do another mural in the future.

The Mile End Road Mural is a fascinating project and we’re honoured to be including the painting you made of it in the exhibition.  Commissioned for the 2012 Summer Olympics, this must have been an extraordinary experience – can you tell us a bit more about it?

In early 2011, I was approached by Anthony Edwards senior partner of the law firm T V Edwards to come along to his offices on the Mile End Road, London E1 to have a look at an external wall that he thought would be perfect for a mural. The street has been coined ‘High Street 2012’ because of its proximity and importance to the 2012 Summer Olympics. The brief was simply to create some public art that suited the location and had some references to the firm that had been established by Anthony’s uncle in 1929. I did some research in the area and found that a plethora of famous and infamous people had come from, lived in or passed through the area over the years. Combine this with some wonderful and important buildings from the Mile End and Whitechapel Roads and you will have the building blocks for the Mile End Road Mural. 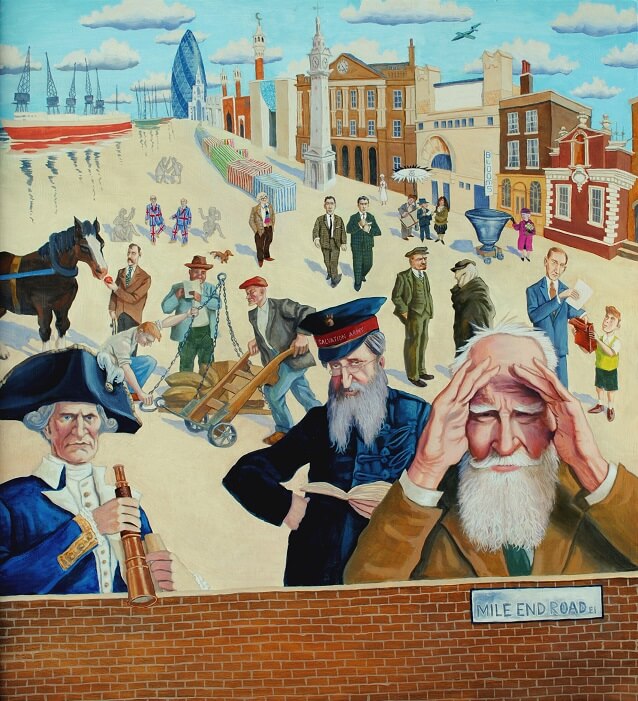 We are delighted that you have chosen to launch your new book The Master’s Muse – Artists’ cats and dogs featuring your series of paintings and prints of ‘Artist’s Dogs and Cats’, at your exhibition at For Arts Sake.  How did you get approached to produce the book and what can people expect to see from the book at the exhibition?

I was approached by Unicorn Press who were interested in publishing a book based on my Artist’s Cats and Dogs prints and paintings. I was immediately quite enthusiastic as they are a publisher of quality art books such as one I hugely admire featuring the work of Stephen Chambers. The project appealed to me further as they wanted to give the book a lovely cloth cover and a proper scale (29 x 29 cm). The show will feature a great number of prints from the book as well as 15 of the oil paintings.

Mychael Barratt was born in Toronto, Canada. He studied art at the Symposium School of Art, Winnipeg, and the Nova Scotia College of Art and Design, Halifax. He arrived in London, England in 1984 and worked for many years as a freelance illustrator. He studied etching at Central St Martins School of Art and became a full-time printmaker in 1991.He was made a Fellow of the Royal Society of Painters-Printmakers in 2002 and in 2013 was elected President and has been repeatedly selected for the Royal Academy summer exhibition.

Myths Maps and Muses is at For Arts Sake, Ealing from 11th September to 11th October 2015.  To attend the private viewing and book launch (with signed copies) on 10th September email [email protected] During the run of the exhibition we will be holding a competition on our Facebook page, giving you a chance to win Mychael’s print, Bridget Riley’s Dog.

Mychael Barratt is a printmaker and painter born in Toronto, Canada and has been living and working in the UK since 1984. His works are full of detail…
Read more about Mychael Barratt