Morgan Doyle is an accomplished and experienced printmaker who has shown extensively both in the UK and internationally and our next exhibition at The Gallery Downstairs will feature over 25 of his prints.

Morgan Doyle’s work is continually evolving as he searches for fresh modes of expression. Over his career Morgan has studied sculpture, got involved in performance and then became a painter. Since 2007 Morgan has focused on print, finding it to be the most effective medium to translate his ideas and we’re delighted to be able to show a range of his print work in our exhibition of his work.

Whilst working with Morgan and choosing the pieces to show in the exhibition we chatted to him about his work, his influences and techniques:

One of the notable features about your prints is the texture and layering that you create, often with the result that they like look like paintings. How do achieve this effect?

“For painting I use oil paint, usually on linen, but sometimes on paper or metal plate. My printmaking techniques are extensive, using etching, woodcuts etc. The pieces tend to be multi-layered with the prints passed through the press many times, resulting in mono print pieces more often than in repeatable series. The work is becoming more painterly over time; I guess I like people to ponder whether it is or isn’t a print. This new approach is deliberate, I like to keep my work evolving and challenging for me as well as the viewer, in order to keep it fresh and keep me thinking ahead.”

Many of your works on a large size – what’s the reason behind this?

“The scale of the work helps people to visualise the vastness of the spaces I am trying to represent, it allows for more areas of quietness in the image. The largest prints are normally done over a long period of time as they need to be air dried and I use a lot of white which dries very slowly. I work on a number of pieces at the same time. Sometimes I have a particular image in mind, other times I rely on instinct letting the piece evolve – in a way like controlling chaos. I work very quickly at first and put the work away for weeks, possibly months, and then I look at them with fresh eyes and then re-work them.

I tend to keep all my prints even the ones that do not work and have recently begun using these to make small collages, some of which will be seen in Ealing. They were at first simply ways of working out larger works but have evolved into prints in their own right, independent of the larger scale works.” 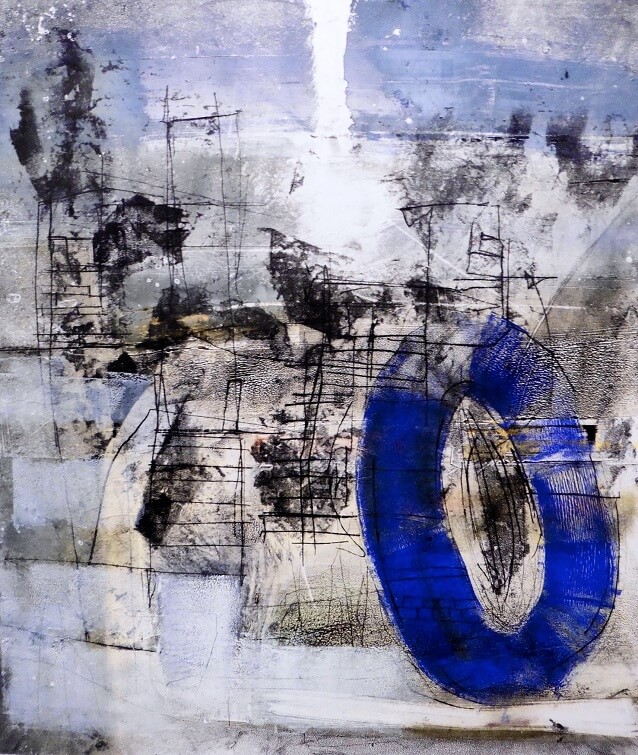 Where do you find inspiration?

“My inspiration is multifactorial, but significantly influenced by my travel and the changing landscapes the world has to offer, such as the huge contrasts between Machu Piccu in Peru and the scenic landscapes of Australia. I have travelled a lot and the work is made up of collaged images from the memory of things. These may not necessarily be beautiful things; I was recently more interested in the amount of road side rubbish in Peru than the Inca walls! These incidents manifest themselves at some point in a print so what seems like a random mark will probably have a definite source.

I identify with artists like John Piper and Prunella Clough. I am drawn to work that has a certain bleakness to it, like the large abstracts of Robert Motherwell relating to Lorca poetry and the plays of Samuel Beckett, though the written word is incredibly visual.”

Is there anything you couldn’t you do without?

“My studio in Chelsea. I hope that the solitude I find in that space comes across in my work.” 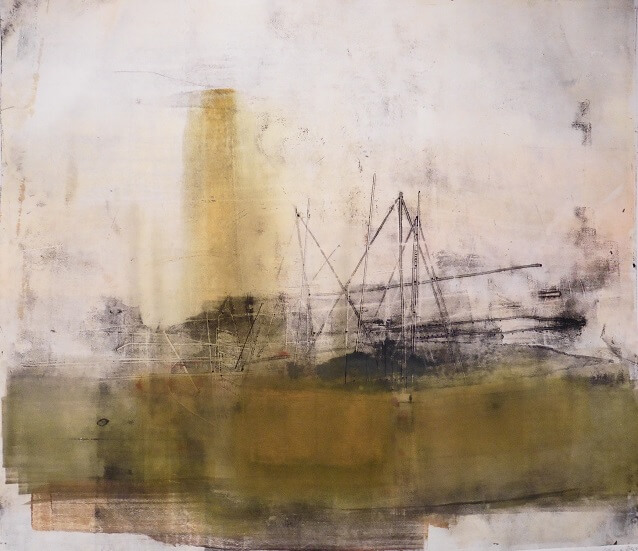 It’s not always clear what we are seeing in your work – what is there and what is not. Are you interested in capturing memories and atmosphere’s rather than actual events or places?

“Most definitely. My work is meant to be a mood unto itself. There is an emptiness that allows the viewer to enter into a newly created world that seems familiar, like remembering an incident when only certain things are clear and others are less distinct. It should allow for different interpretations so that the actual event is one that the viewer creates.” 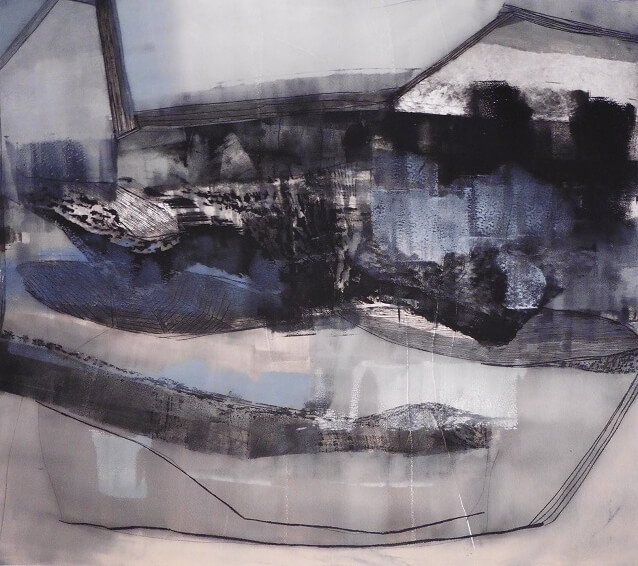 Recent exhibitions include, Northern Art Fair, Harrogate; Originals 2008, Mall Galleries, London; London Art Fair (2008) and Royal Academy, Summer Exhibition, London (2007). He was elected Associate Fellow of the Royal Society of Painter/Printmakers in 2008. He was invited to select for Print Originals, Mall Galleries, London, and for Lincolnshire Open Print Exhibition in 2008.

Morgan Doyle’s exhibition at The Gallery Downstairs in For Arts Sake runs from Friday 13th February to Sunday 1st March 2015.