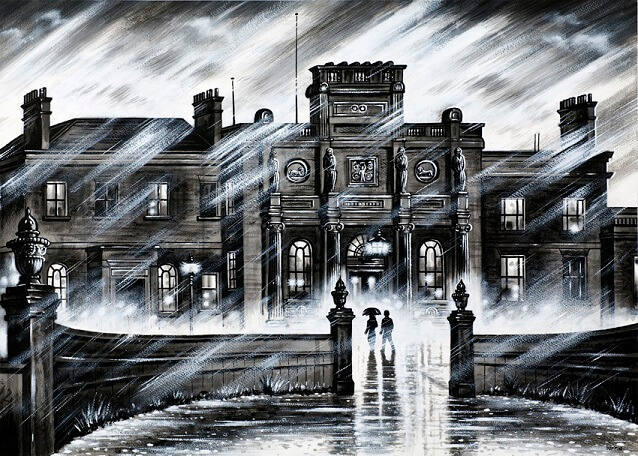 Artist John Duffin has created an atmosphere of gothic Gotham in the rain in his new etching of Pitzhanger Manor which he has made especially for his upcoming exhibition ‘City Noir. John Duffin’s London in Paint and Print’ which runs at our gallery from 23rd October to 22nd November. Explaining some of the inspiration behind the work, John told us:

“I first visited Pitzhanger Manor over 20 years ago when I began exhibiting prints with For Arts Sake. I knew it’s history as the one time country home of Sir John Soane and was struck by its grandeur and sense of being from another time, as if it had stayed still whilst Ealing developed and grew around it. I had wanted to make a piece of work about the building for some time and my upcoming one man show of paintings and drawings at For Arts Sake was the ideal time.

I made a lot of drawings of the building in pencil and then in my studio in south London began to work very freely and boldly in black ink on paper, the picture made itself in many ways as the entrance wall and frontage with four sculptural figures began to take shape and suggest a mood and feeling for the image. I had been there in the rain a few years ago and wanted a sense of that time, trying to imply the timelessness of Pitzhanger Manor as it stood against the elements over several hundred years. The image has a quality that is in many of my etchings and paintings, I trained as a draughtsman before studying at Goldsmiths’ and Central St Martins in London and I like to capture strong architecture in dramatic weather, showing the man made and natural worlds colliding. I also felt the echoes of childhood and visiting country homes with my parents, some of that wonder at older buildings remains with me and came out in the dramatic depiction of Pitzhanger.

I also have an ongoing interest in graphic novels and cinema and I can see the unconscious reference to Batman’s Gotham city and the film noir weather battering the two figures as they approach Pitzhanger. The picture also has a feel of a film like Hitchcock’s “Rebecca,” in which an old house holds memories and unseen ghosts, a subconscious nod to the film history nearby in Ealing perhaps.

I hope that this neo noir depiction of a much loved site evokes memories and moments in viewer’s minds, gothic Gotham in the rain is just off Ealing High Street…”

We look forward to exhibiting this new work alongside over 60 other paintings and prints in John’s solo exhibition ‘City Noir. John Duffin’s London in paint and print’ which runs at For Arts Sake from 23rd October to 22nd November 2015.

To find out more about the exhibition and the artist please read our interview with John Duffin here and see more images of his work here.