Prior to Paul Catherall’s exhibition ‘15 Years of Linocuts‘ opening on Friday 17th April, Paul found time to catch up with us at the gallery and chat about his work, inspiration, life as an artist and his love for London. You can read our interview with him below and we’re delighted that Paul will be attending the private viewing of his solo exhibition on Thursday 16th April at For Arts Sake between 6pm and 9pm so please do join us for a glass of wine, meet Paul and see his prints for yourself.

Where do you work – do you have your own studio?
No I print at Artichoke Printmaking open access studios in Brixton. I sometimes daydream of having my own place – but I do a lot of the prep at home so going in to print is a nice change, a bit like still being at college. 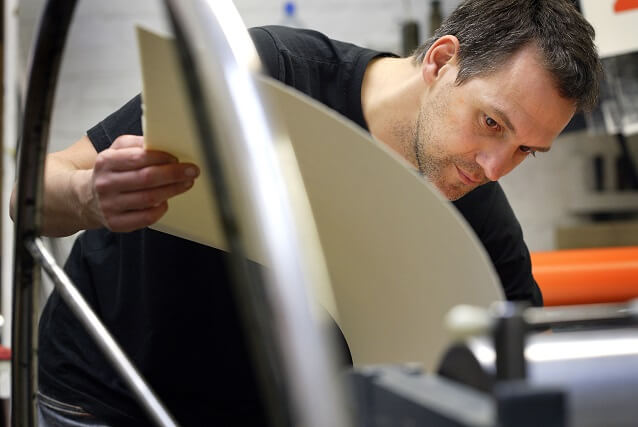 You have had some very high profile commissions e.g. Transport of London. Can you tell us a bit about this – how do clients approach you?

London Transport approached me in 2001 – so it’s been a while! Michael Walton, who commissions new posters came along to one of my early shows, liked what he saw and since then I’ve been very fortunate to have had numerous commissions. It’s been wonderful as you become part of the heritage and it’s an amazing show when the posters get on the system. People approach from different places – the RSC just researched the style they were after. Others like British Airways come from recommendations from advertising agencies and the Southbank Centre came from a show put on at [email protected] which is just down river. Basically the best thing is to get your work out there and hope it gets seen. I used every penny I had to put on my first large solo show at Oxo in 2005. 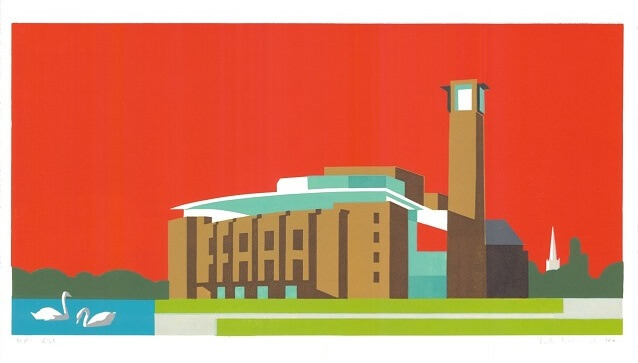 Many of your prints feature architectural landmarks and London in particular. What is it about buildings and the construction of form and shape that interests and inspires you?
Well I love London, always have. I came down here as soon as I’d graduated. My upbringing in Coventry gave me an appreciation for modernist/brutalist landmarks (though I didn’t know that as a teenager…). I found that places like the Elephant and Castle shopping centre and the Southbank reminded me of my childhood so I felt at home there. I just find strong light on concrete structures appealing!

I love that London had such a range of architecture – though I mention Modernist stuff I equally appreciate earlier landmarks like St Pancras /Midland hotel and the old power stations at Battersea, Lots Road and Greenwich.

In the future however I aiming to start doing more landscapes. 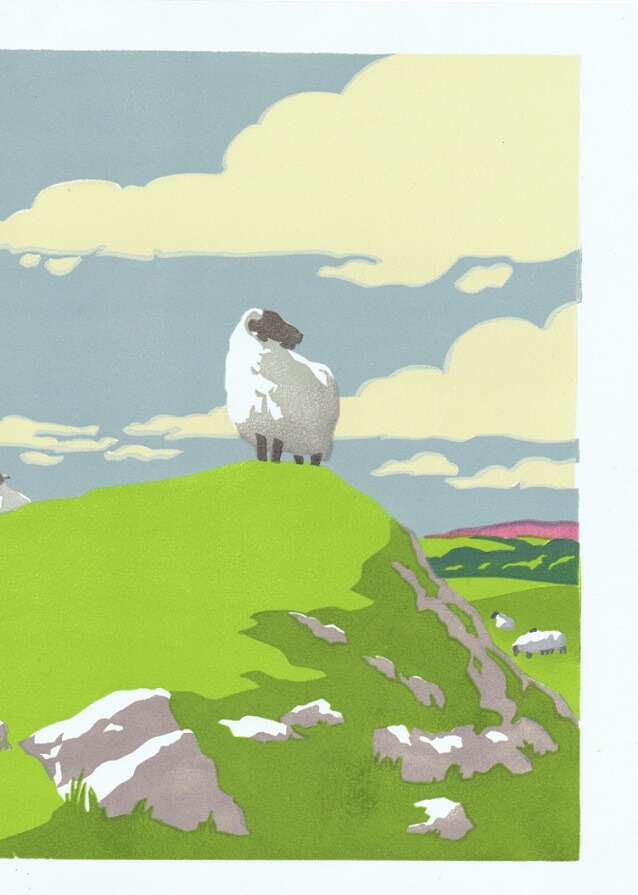 Colour bursts out of your prints and you manage to balance both a bright palette against a more muted selection of grey and blue. Can you tell us a bit about how you work with colour?
It’s hard to explain – I usually have a colour in my mind for a certain building. I knew I’d usually have the Tate Modern against pink and Battersea with terra cotta and grey, National Theatre with purple; the colours just seem to fit. I work really hard on them too – if one is out of place then everything fails. I’m inspired by the old travel posters, Tom Eckersley and Tom Purvis. The colours on those mid 20th Century posters were just brilliant – bright but muted at the same time and always balanced but always unusual. 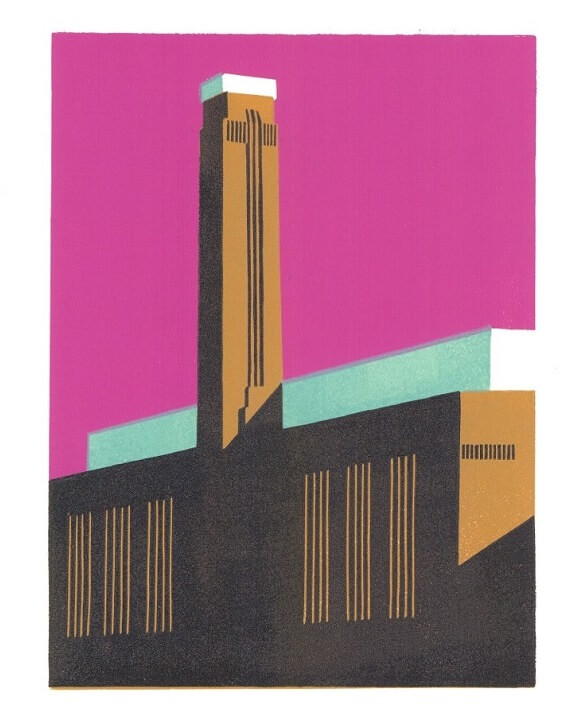 Can you describe a typical day?

Well if I’m drawing then just sitting at the desk sweating over whether something should move by 5mm to the left. Tea/coffee, chocolate biscuits and music help. I can draw and think all day and it feels like 10 minutes – but if something isn’t working it’s like pulling teeth.
If I’m carving – as above; still at home, but a bit more therapeutic. Music or radio nearly always on. When I’m in studio I’ll get in around 10 am (pre kids it was more like 8am) and just get stuck in until either 4.30pm (if seeing kids before bed) or until 11.30pm so I can get the last tube home.

How long do you spend on a work?
Average is about 4 – 5 weeks per print edition, but it varies – the bus series for Transport for London was pretty much a year for four images!

What’s integral to the work of an artist?
Tea, coffee and biscuits – and never settling for ‘OK’.

What role does the artist have in society?
Mmm mmm – I don’t know! I consider myself an illustrator/ craftsman/commercial artist really. Artists can make important statements and comment/reflect on society in the way that music can but I’m not really in that realm. It doesn’t mean I won’t be in the future but right now I see my stuff appreciated in the way that good design is. 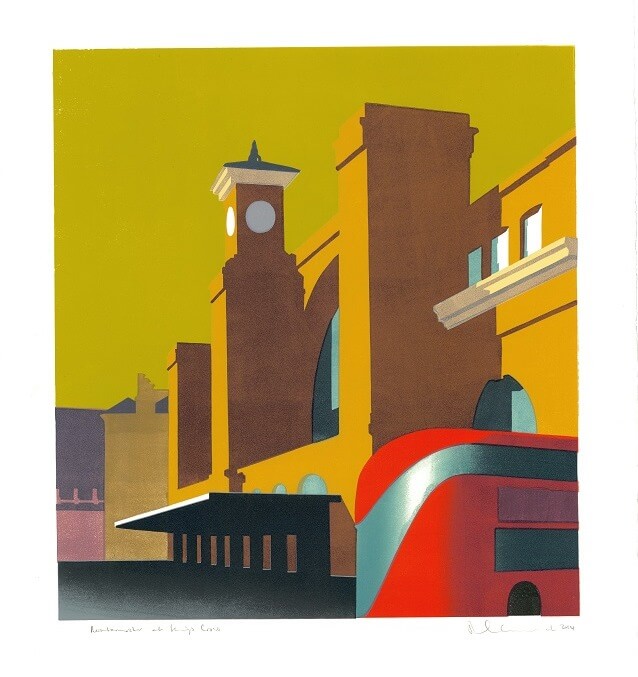 What has been a seminal experience?
Definitely doing a range of posters for TFL – my image on the cover of ‘London Transport Posters’ book was a really proud moment.

What art / artist do you most identify with?
Maybe with people like Tom Eckersley and Tom Purvis because they were very serious about their work but saw no problem in being a commercial artist. They wanted their worked to be used and part of everyday life – which is quite an achievement in itself.

What’s your strongest memory of childhood?
I did draw lots of pictures of mass battles and football games with stickmen. I definitely remember the summer of 1976 and just spending most of it in the garden with my brothers and most likely an Action Man….

What’s your scariest experience?
I’m actually allergic to exercise! I can have an anaphylactic reaction from running around when it’s hot or cold. I went to casualty after 5-a-side football looking like the Elephant Man – quite scary at the time… 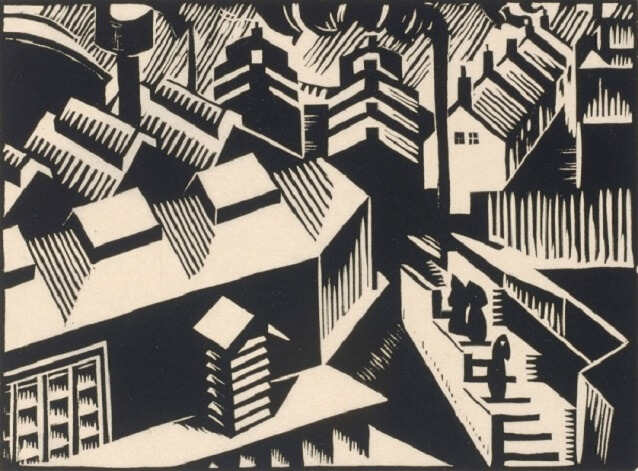 What jobs have you done other than being an artist?
Plenty! From a post boy at the Stage Newspaper to a toy warehouse assistant at Selfridges – all important stuff!

What memorable responses have you had to your work?
Have virtually always been good and positive – would almost like to hear some negative (if constructive!)

What food, drink, song inspires you?
Tea, coffee, biscuits and music – Ariel M and Tim Buckley are played a lot when I’m working

Is the artistic life lonely? If so, what do you do to counteract it?
It can be – shared studio is best solution.

Name something you love, and why?
My missus and two kids – cos somebody’s got to.

What is your dream project?
Shopping centres from the 50’s and 60’s and/or Motorway service stations from 60’s and 70’s. 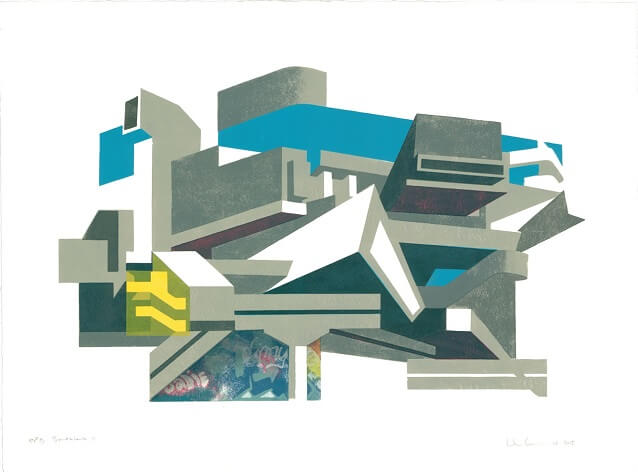 Favourite or most inspiration place?
Most places on the river in London, London Zoo and Springfield Park in North London.

What’s the best piece of advice you’ve been given?
Draw what you see – not what you think you see. Work very hard.

What wouldn’t you do without?
My wife, kids, coffee and my records. 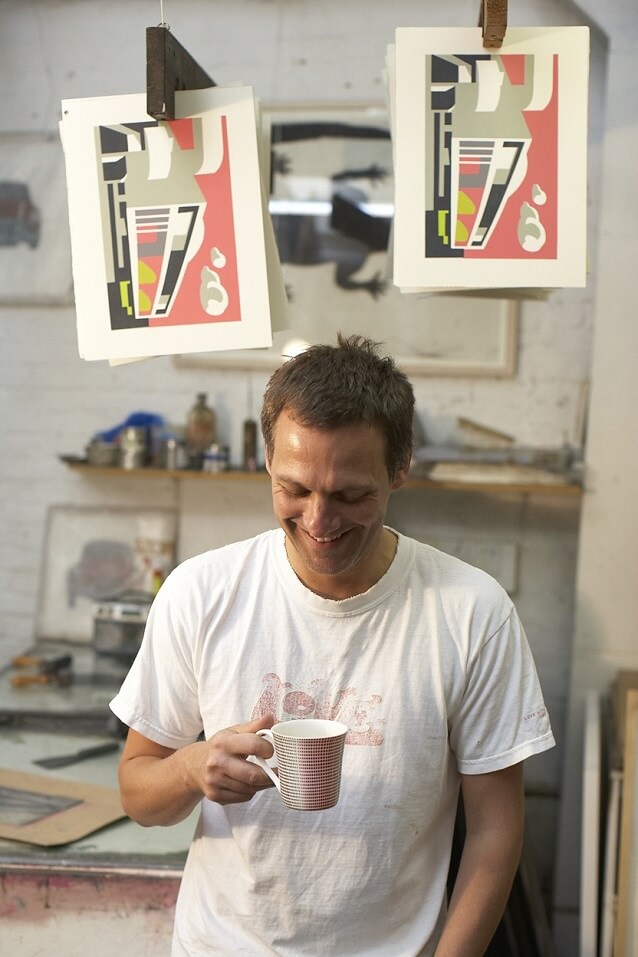 Paul Catherall’s solo exhibition ‘15 Years of Linocuts‘ runs at For Arts Sake from Friday 17th April to Sunday 17th May 2015 and will feature over 50 works including original prints from Transport for London’s recent bus poster campaign, artist’s proofs of sold out editions from high profile commissions and design packaging and book cover illustrations for Penguin and Profile books, some for the first time. There will also be a competition running giving people a unique opportunity to win an artist proof of one of Paul Catherall’s Oxo Tower prints which have now completely sold out – see our Facebook page (here) for details.