Let’s start from the early days. Where did your printmaking journey begin?

My printmaking journey began when I was a small child. My father worked in a commercial printing company and I spent many weekends and bank holidays working in the finishing department (collating a few pieces of paper and putting them into an envelope tens of thousands of times over and over…that sort of thing).

I guess watching the old litho printing presses churn out printed matter and the smell of the inks had a lasting effect on me. I did a bit of printmaking at all of the art colleges I attended but I really got into specialising in printmaking during my Fine Art degree course in Exeter.

This was because I couldn’t get on with what I viewed as the pretentious nonsense that was being spouted in the painting department of the college and, although there was a lot the same thing in the printmaking department, the technician was down to earth so I got on well with him. 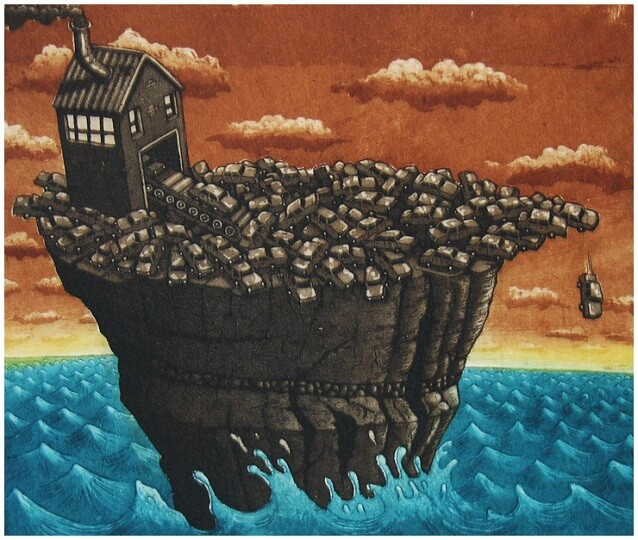 Much of your work tends to focus on the environment and the impact of urbanisation e.g. “Hungry City”, The “Tesco” series. How important is social commentary in your work?

The themes that underpin my work seem to be about the environment; the daily grind of work, man’s greed and anything that comes to my head really. I don’t set out to make work on any specific subject – it’s just what comes out. I don’t want to put constrains on myself in terms of subject matter as I would fear I would end up making the same sort of work, year after year.

I don’t really know what a signature style is as I just make the work without it being a certain way…it’s not a conscious thing. If I had to I would say my work is social commentary/satire and leaning towards comics in style. 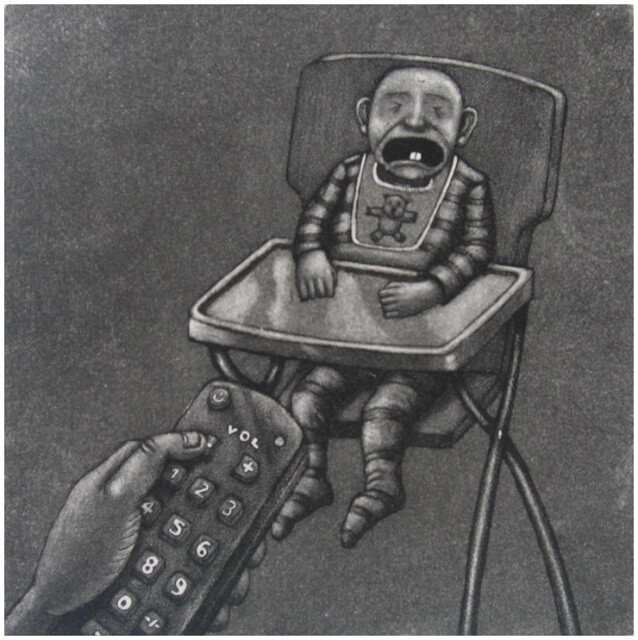 The level of craftmanship in your work is incredible. A lot of your work uses mezzotint etching. Can you explain what this involves?

Although I spent around 9 years only making mezzotints, I now mostly make etchings and very occasionally will do a lino cut….depending on the image. In the future the images may very well dictate other forms of printmaking. The hand-printing is a very important aspect to me. Whilst the printing presses in the factory where my Father worked churned out thousands of exact copies, the hand-printing process slowly produces prints that are all slightly different to each other. I hand print all my own work (I don’t employ an Editioner to help), so the customer knows I have conceived the idea, drawn the image, made the plate, printed the work and I also make my own frames. I don’t use computers in any way so there are no shortcuts…some prints can take up to 2.5 hours to print whilst a digital print would take seconds. 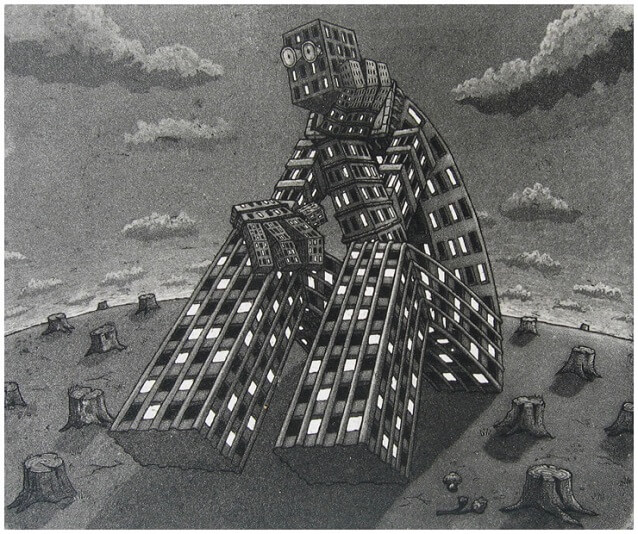 There is a surreal, dreamlike quality to your work.  What are your influences?

I grew up reading comics and playing computer games and think it had a major influence on my work. I was mad about art as a child and spent many happy hours colouring in large Berol posters with my felt tip pens (when I was 13 I won the Bishops Foodstores national colouring competition; they gave me a BMX bike). I think part of the reason I got thrown out of school was because I was obsessed with making art and had lost interest in everything else…I had no choice but art!

I’m inspired by watching my 15 year old daughter slowly develop into a high skilled and talented artist in her own right. I never pushed her to make art, so one day I can tell her she did it all on her own!

I identify with MC Escher, John Martin (the painter and mezzotint artist of the 1800s), Leo Baxendale who spent many decades drawing for the Beano and Dandy comics, Robert Crumb, Harvey Pekar and Syd Mead (designer on the film Blade Runner). 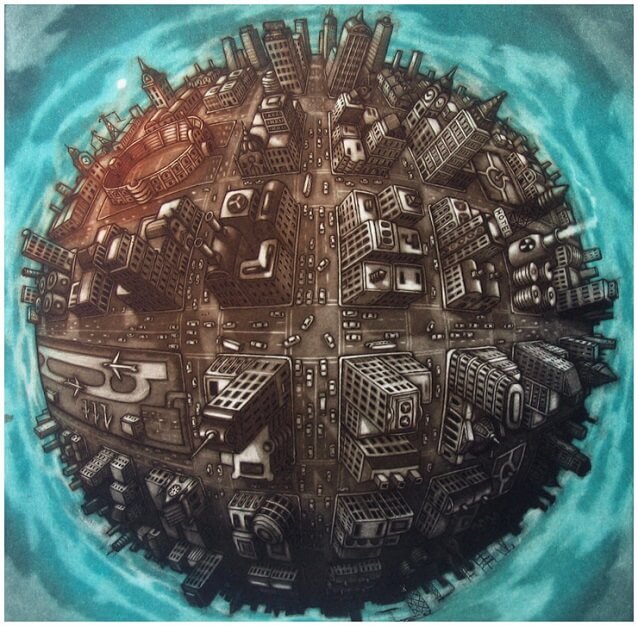 Many of your pieces are extremely detailed such as ‘World of Wonder’ or ‘After Escher’. Could you tell us a bit more about your design and research process?

Most of my work is from memory…I rarely use any reference unless it’s something very specific that I have to get right, like a fork lift truck for instance. When I get an idea I will draw it very badly in a sketchbook….like a visual note and then at some time develop it on a larger piece of paper as a drawing. I always struggle with the drawing as I am not using reference….I don’t like the idea of tracing an existing image or photo and transferring it onto a copper plate as the work always looks like that has happened and it lacks any kind of life to it. I think the natural quirks or styles in people’s drawings are what breathes the life into artwork.

The larger more intricate work can take many months to make…I try not to count. The drawings alone can sometimes take weeks, but as it’s a print I can justify spending so long on them. If it was a one off painting I couldn’t and would have to sell it for a small fortune.

I guess my favourite work I have made is called ‘Work,home,Work,Home,Work’. Although most of my work is detailed and intricate, this earlier etching captures how most people feel about their jobs in a simple way. 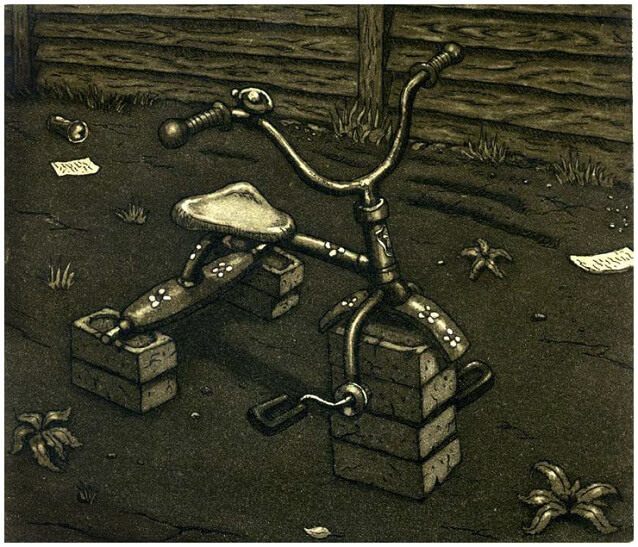 What the life of an artist like for you?

My typical day consists of driving my daughter to school, then walking my son to a different school, then driving my wife to the station before I start work in my studio. If I’m etching a copper plate that day or printing I have to time it that at 3.15pm I go and collect my son from school. I then have to sort the kids out with food for tea and maybe help with homework before going back into the studio.

I work at the back of the garden in my purpose built studio. Although it’s a massive luxury to have this set-up you don’t get to be around other artists to give each other support.

Besides printmaking I have no other interests or hobbies….just kidding! I exercise religiously, partake in computer games with my son, play a lot of football with my son, cycle when I can, watch films, drink beer and eat foods that are bad for me.

More about the artist:

Martin Langford studied for his art degree at Polytechnic South West and then did a post graduate in Advanced Printmaking at Central St Martin’s College of Art where the late David Gluck RE introduced him to the old traditional printmaking technique of mezzotint.  Martin is an elected full member of the Royal Society of Painter-Printmakers (RE).

You can see more of his work here.

Born in 1970, Martin Langford studied at Watford College of Art and Design and then at Plymouth University where he graduated in 1993 with a BA (Hons)…
Read more about Martin Langford