Jazmin Velasco is from Guadalajara, Mexico where she studied graphic design, illustration and printmaking, while working as a cartoonist for a national newspaper in Mexico. She currently lives in the south of England where she illustrates books, makes prints and works with ceramics. Jazmin is a member of the Society of Wood Engravers, showing her work at the National Print Exhibition and the Summer Exhibition at the Royal Academy, London. We recently caught up with Jazmin Velasco to find out what influences her and what she’s currently working on. 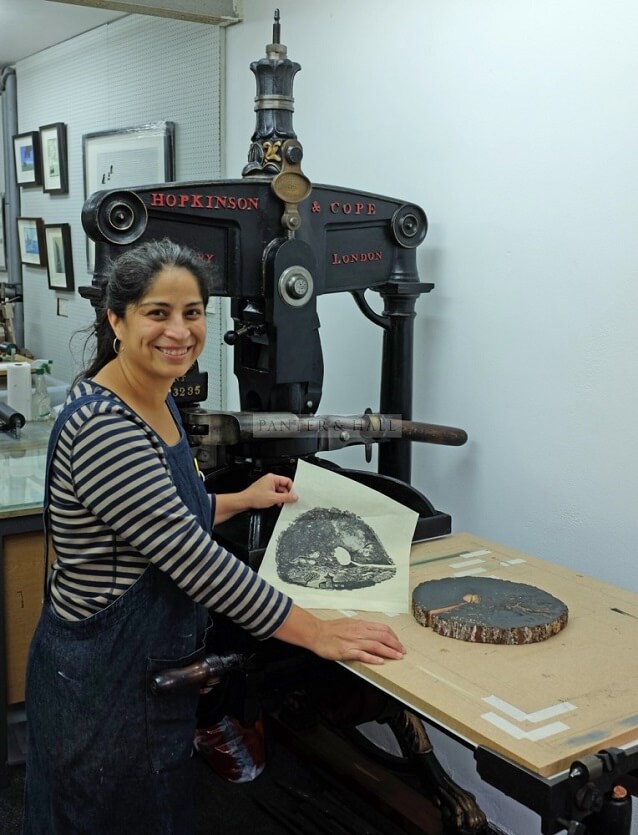 Can you tell us a bit about your background? We understand that you were born in Mexico where you trained as an illustrator….

“I got the drawing gene from my father who was a cartoonist. My professional life also started as a cartoonist, at the age of 18 in a local weekly magazine and later in a national newspaper. I did that without much thinking, drawing was easy for me. I had grown up reading comics and cartoons. As a child the highlight of the week was to be the first one to get the comics section in the Sunday newspaper.
Then I studied graphic design and illustration. Later I moved to Mexico city to carry on drawing political cartoons and started also illustrating books for children.” 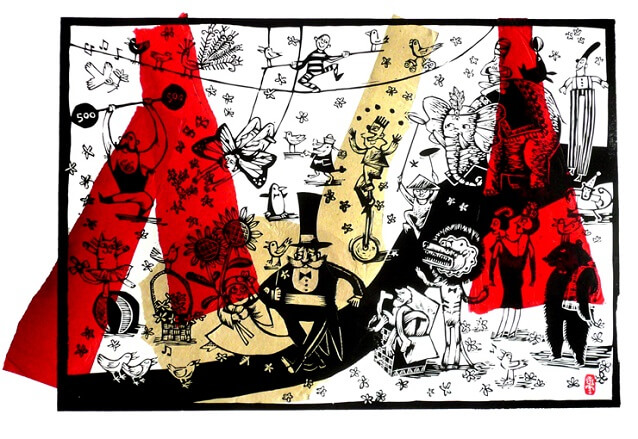 What are your influences?

“The list is rather long. Very early on I discovered the work of Saul Steinberg and he has remained The One in my heart. But as I was into comics my idols were mainly Argentinian artists like Quino, Fontanarrosa and Hugo Pratt and I was absolutely crazy about all the classic comics of the past, like Krazy Kat, Pogo, The Fabulous Furry Freak Brothers, Love and Rockets, etc. When studying graphic design I aspired to be as big as Milton Glaser and Mariscal. Then when I focused in illustrating children’s books I was heavily influenced mainly by Europeans like Wolf Erlbruch and Kveta Pacovska. Now as a free artist the list has become so long that I should only mention a few starting with Picasso, of course, because it’s impossible not to admire his energy and the ease with which he threw himself into any medium, as a painter, printmaker, ceramicist, etc. Other painters: Alfred Wallis, Mary Newcomb, Paul Klee. Printmakers: Leopoldo Mendez, Eric Gill, Otto Rohse and the newly discovered Imre Reiner. Ceramicists: All the anonymous ceramicists of the past: precolombian Mexicans, the Haniwa and Dogu Japanese tradition, Cycladic art, Vinca culture, etc.” 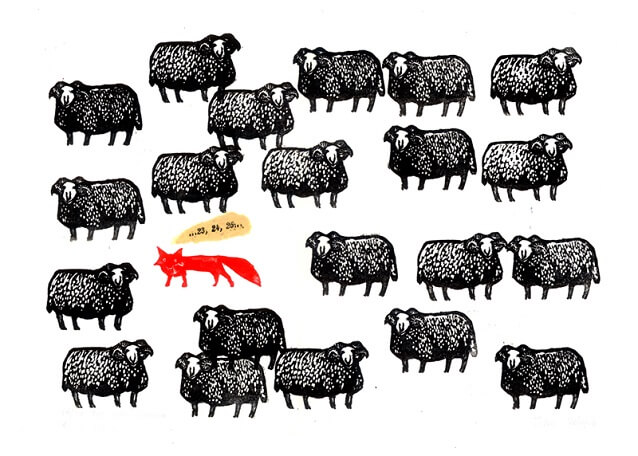 How did your move to England change your work and how did you move from illustrator to printmaker?

“My work didn’t change much it seems. After all these years it seems that my work has remained quintessentially Mexican. Not that I try to be more European or remain Mexican. My work is what it is and is my friends or people who buy my work who tell me that my work is terribly Mexican still. Even though I make prints and ceramic figurines illustrating my fascination for the books of Jane Austen for example or that now we live in a very English tiny hamlet, there is an aztec descendant observing English life. During my first few years in London I still worked full time for publishers back home but then one day I saw an ad calling for artists for a local exhibition and thought it was a good idea to make some linocuts, frame them and submit them. They all sold. It felt really good and I haven’t stopped making prints ever since. Just to think that my drawings, my prints, my ideas hang on people walls. Amazing.”
I moved to London because I felt at home from the moment I landed with my backpack and a euro rail ticket back in the 90’s. I say as a joke that in a past life I was from these isles. I could never stand the weather in Mexico and longed for a place with non-stop rain. I dreamed to live in a place where there are no cockroaches or lethal bugs everywhere and where women are equal as men. English humour and chips are a bonus. I’m perfectly happy here. I am constantly fascinated by British history and idiosyncrasies. The eccentricities, the love for the language, for gardening, for animals, for the past.

Sometimes Mexican themes find their way to the press. I am assaulted from time to time with a bit of nostalgia, it seems. I realised now what a cool thing is to have had not one but two professional masked wrestlers in the family, two uncles, “El Apolo” and “El Diablo Velasco”. It was embarrassing in school to say to my little friends that my dad was a cartoonist and my uncles were wrestlers and wanted like everybody else to have an accountant father or some other normal profession.” 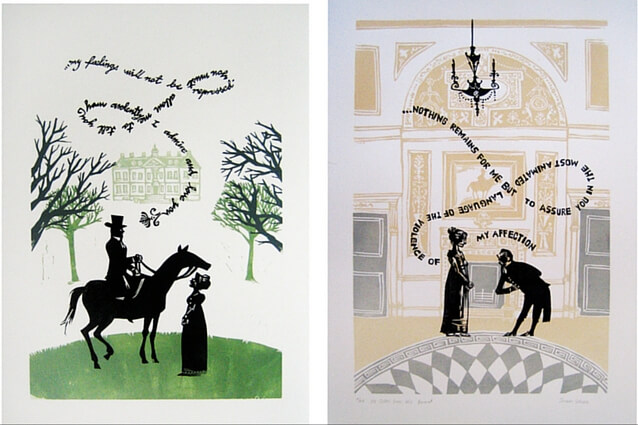 Where do you do the majority of your work? What is the space like – are we right in thinking you moved from London to the country a few years ago?

“We had a very nice house-studio in North London but eventually it wasn’t big enough and my husband (Colin Moore), who is also an artist, was ready to live closer to the sea. We aimed to find a barn to convert into big studio space but soon enough we found out that everybody has the same idea and there are not enough barns available. We found a very nice house anyway where we could accommodate all the presses, including a wonderful Victorian Albion, have a painting space for Colin and my ceramic studio.” 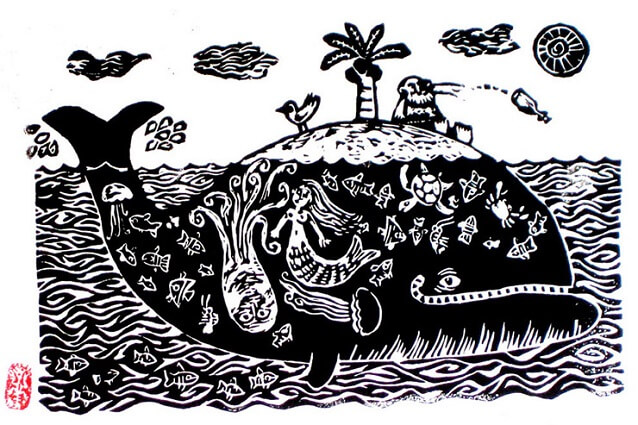 You seem to work mainly in relief, such as lino, woodcut and engraving; what is it about these techniques that appeal?

“I consciously and dutifully learned all the techniques there are to produce prints. Including the very laborious lithograph in stone, but I still prefer the strong mark lino or wood leave. I have done colourful prints but I keep going back to images using only black and red inks and the whiteness of the paper. There will be from time to time ideas that will be better done in other techniques. I’ve been lately experimenting mixing techniques, drypoint and wood engraving. I also made some prints with a Japanese toy that doesn’t exist anymore called gocco which is basically screen print but less messy. It’s a shame that I won’t be able to acquire the inks or screens for it!” 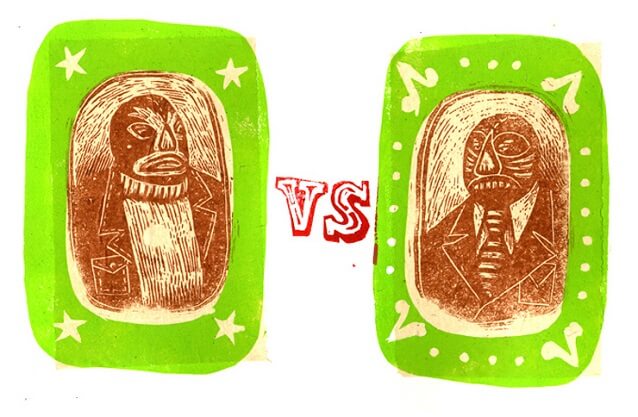 We understand you also teach printmaking – how does teaching influence your own work?

“I had the good fortune to be invited for three years in a row to teach at a wonderful summer school in the Bavarian Forest called Bild-Werk Frauenau. The experience was so strong that for the first few days I suffered terrible insomnia. The setting of the school is designed to keep you in a permanent state of creativity, with the students flowing freely from one classroom to another, they are allowed access day and night, and visitors, children or pets are banned. So all that took me utterly out of my comfort zone and I got dragged around with the energy of everybody around me. That and the German beer. The work I created there was very different from what I do here. The Germans and Czechs have a very different concept of art.
That region of Bavaria and the neighbouring Bohemia specialises in glass, but they include wood sculpture, ceramics, painting and now printmaking!” 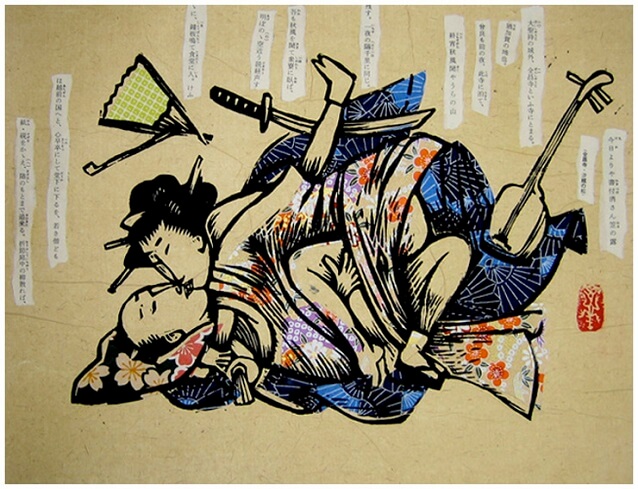 In China, the arts and martial prowess have a long joint history. We gather that you are a practitioner of Taoist martial arts. How do you relate this to your work as an artist?

“When you start reading about Tao or leaning a taoist art like t’ai chi everything else in life starts to make sense. Tao is the philosophy of common sense, of the natural order of all things. If you can understand the simple meaning of the yin yang symbol, the balance of all things in life that will be more than enough to apply it to everything else.” 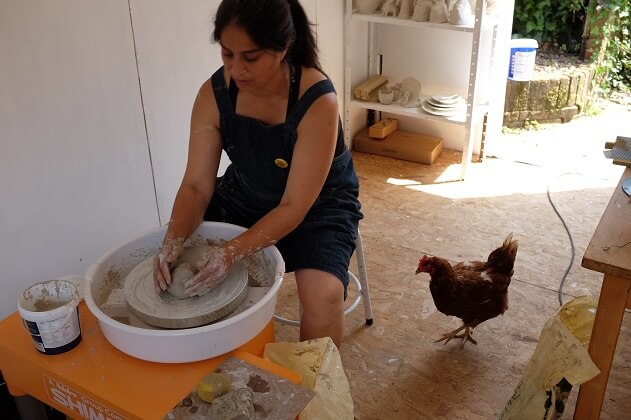 What are you working on at the moment?
“I’m stuck in a long process of change, that probably started the first summer I taught in Frauenau. But I’m still producing wood engravings. One of the changes that happened in my work where the inhabitants of the prints. Sheep, horses, foxes and pigs are the main protagonists at the moment. And in my ceramic little world I am very much enjoying having my own space to experiment to my heart’s content. I have resumed the production of Regency Figurines.”

To see more of the work of Jazmin Velasco please visit her page here.

Jazmin Velasco was born in 1971 in Guadalajara, Mexico where she studied graphic design and illustration. Years later she moved to Mexico City and…
Read more about Jazmin Velasco