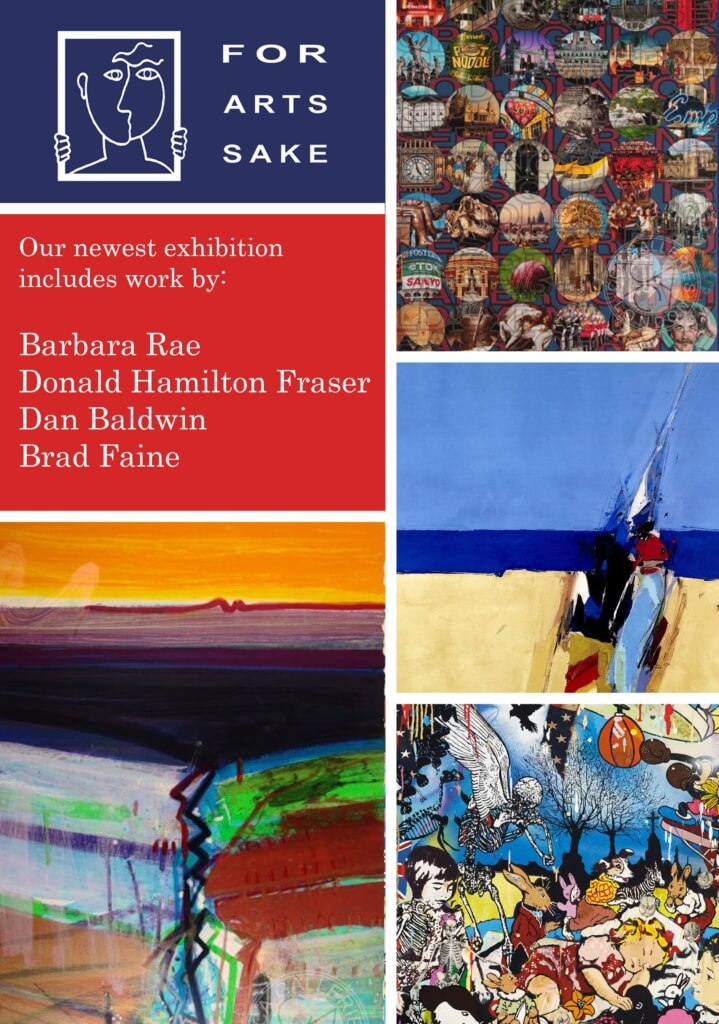 Barbara Rae CBE RA  is a highly acclaimed painter and printmaker, her abstract works affirm her incredible gift as a colourist. Her works are often inspired by specific places which she uses as departure points for a flight of colour and sweeping compositions. Rae uses washes of bold colour; merging form, line and hue into each other with dynamic composition, breaking up the picture surface with thrusting lines. The works draw the viewer into the artist’s vision, emitting energy and warmth. Rae rejects the term “landscape painter” because the patterns and items left behind as traces of human presence are her prime interest.

Donald Hamilton Fraser  exhibited his highly acclaimed work in Paris New York Tokyo Zurich and many other cities around the world. The list of galleries that own or have exhibited his work is phenomenal. Donald participated in many of the most significant exhibitions of British work including the Royal Academy’s 25 Years of British Painting, where he was also a Royal Academician and a trustee since 1995. Donald’s predominant subject matter was landscape. Here he combined his Scottish decent and his affinity with French painting from his study there in the 1950’s. This is greatly reflected in his style and execution. He layered thick bright paint with a palette knife to produce an almost collage effect. The landscapes remain close to their origins whilst forming abstract almost dream-like fields of colour.

Dan Baldwin’s work bridges the gap between abstract and figurative painting to create a landscape that simultaneously reflects reality, the power of the imagination and the private, inner workings of his mind. His unique aesthetic is difficult to categorize but edgy brushstrokes, sinister themes, and symbolism are characteristics of his prints, paintings and 3D clay mouldings.

Common motifs in Baldwin’s organic compositions include children’s storybook illustrations, images of war, skate graphics and Vanitas, a particular type of still life painting in which objects symbolically refer to a theme of emptiness or worthless action. Vanitas is especially associated with Northern European still life painting in the 16th and 17th centuries, and the relationship between Baldwin and painters from this period has been noted; stemming from Baldwin’s use of symbols such as the flower, the skull, the bird, and rotting fruit, to explore themes of life, death and mortality. Baldwin successfully recontextualizes these symbols, making them relevant for a modern audience.

Brad Faine‘s early studies centred on an interest in conceptual art and later developed towards a concentration on colour field painting. While a student at Leciester he met Sydney Harry whose research into colour phenomena attracted his attention and since then his work has been concerned with the study of the qualities of colour and form without reference to natural objects. His interest in printmaking was motivated by a desire to make multiple flat colour images for which screen process printing was ideally suited. He found the hard edge image too restricting and for this reason he developed a form of continuous tone printing within the limitations of the medium. Brad Faine has also designed and produced a number of games which have been exhibited. He has undertaken painting commissions and his work has been exhibited in many group shows and is in many private collections.