Exit Pursued By A Bear by Mychael Barratt 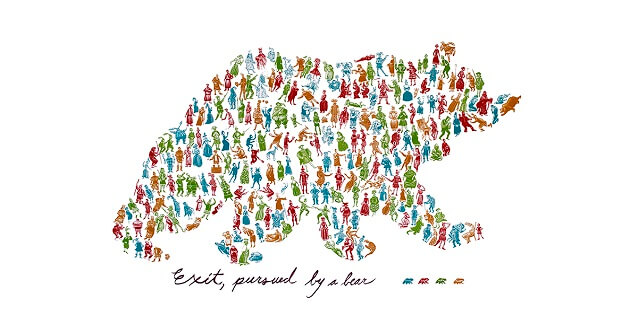 On the 23rd of April this year the world will commemorate 400 years since the death of William Shakespeare and there are events galore being planned for this special anniversary. One artist has planned a very special tribute to the bard. Known for his prints and paintings in the English narrative tradition, Mychael Barratt’s work displays a love of history. Language is also hugely important to him, with titles playing an integral part of the work and the action often involves verbal and visual puns and references to artistic and literary themes. It’s no wonder then that Mychael Barratt has been drawn to Shakespeare many times for inspiration and has produced various works celebrating him, including O for a Muse of Fire, which is an A-Z of Shakespeare references and All The World’s A Stage of The Globe theatre.

Mychael Barratt was made a Fellow of the Royal Society of Painter-Printmakers in 2002 and at the AGM in 2013 was elected its President (PRE) and was the commissioned artist for the Globe Theatre throughout Mark Rylance’s reign as Artistic Director, during which time Mychael saw every play that Mark Rylance did at The Globe.

This year for the anniversary, Mychael Barratt has produced a new piece, Exit Pursued By A Bear, inspired by Shakespeare’s most famous stage direction given in Act III, Scene 3 of The Winter’s Tale.

In this scene the bear literally comes out of nowhere to dispatch Antigonus, an elderly and rather tedious character; it’s a direction that is notoriously challenging to stage and has generated many debates about what Shakespeare was thinking. Did he intend for a real bear – or perhaps a man in a costume – to appear on stage? Should it be scary or amusing?  We caught up with Mychael Barratt to ask him about his depiction of this stage direction and what challenges the print provided him with.

FAS: You’ve long been associated with Shakespeare, especially for your duration as the commissioned artist at The Globe. What is it about his plays that appeal so much to you as an artist?

MB: Shakespeare’s work has inspired me ever since a particularly passionate teacher taught me As You Like It when I was 11. I drew Touchstone for him as a thank you. It was reading about Sam Wanamaker’s plans to rebuild the Globe that fired me up as an adult.

FAS: Can you tell us what made you chose the stage direction, Exit Pursued By A Bear, for your special anniversary piece?

MB: Exit, pursued by a bear is a line that is well known to all Shakespeare enthusiasts. The title, although from A Winter’s Tale, feels universal, as it is a stage direction and gave me the ideal opportunity to do a detailed dramatis personae with a strong central visual image.

FAS: It’s generally agreed that that however you interpret Shakespeare’s stage instruction in The Winter’s Tale, that if you get the bear right things begin to fall into place, as it’s such a pivotal point in the play, turning from tragedy to comedy and linking the two halves of the play. How did you decide what type of bear you wanted to depict?

MB: I grew up in Canada so am very familiar with the look of bears. I watched films of black and brown bears and painted small gestural portraits until I got one that I felt captured the feel of a running bear.

FAS: The print is deceptively simple. On one level it depicts the Bear but on closer inspection all the main dramatis personae from each of the 38 of William Shakespeare’s plays are revealed, providing lovers of Shakespeare with hours of exploration. What was your process in selecting who to include and who to exclude and how important was the positioning of the characters in conveying the Bear’s character and to ensure he was believable as an animal?

MB: My original idea was to include every single character from Shakespeare’s plays but when I looked at the first two plays I realised that I would have well over 1000 portraits to do. Using a silhouette of the bear I worked out roughly how many characters I would be able to include and then worked to edit my cast down to about 240-250.

FAS: Many of your prints include references and hidden clues.  Viewers of your new print will enjoy engaging with this piece and identifying the characters portrayed but you’ve also coded this new print to give us a helping hand. How important was the coding to help people understand the work?

MB: The colour-coding was always a vital part of the design of the artwork but I decided to include a small key that identifies whether the character is from a tragedy, comedy, history or problem play. I feel that it’s important to give clues without removing the joy of figuring things out yourself if you want to.

FAS: How long did you spend on the piece researching all the references and drawing the characters before you moved on to the print process?

MB: With so much of my art, the bulk of the work feels like it’s been done by the time I finish the research. Deadlines are a crucial of the process. With this piece I gave myself two months to do all of the research and draw the portraits.

FAS: And finally, there are so many events planned for Shakespeare’s anniversary – what plans do you have for the day?

MB: I’ve been posting daily details from the print on Facebook and Twitter of all of Shakespeare’s plays in chronological order for 38 days leading up to his anniversary. On the 23 April, I will finally post the image of the complete print and then start posting details from my other big project ‘A Map of Shakespeare’s London’. Watch this space!

To purchase a copy of Mychael’s print click here

Mychael Barratt is a printmaker and painter born in Toronto, Canada and has been living and working in the UK since 1984. His works are full of detail…
Read more about Mychael Barratt