Corinna Button’s work focusses on movement and images, inventing a set of narratives, characters and environments. As a painter and printmaker specialising in etching and oil, her figurative work draws on an eclectic mix of references and inspirational sources. Her pictures are intensely layered and atmospheric depicting many facets of the human condition and offer us glimpses of stories that we feel pulled into. Corinna grew up in Sheffield and recently moved from Teddington to Chicago. Prior to joining us at For Arts Sake she spoke to us about her work, inspiration and life as a printmaker:

Where did your printmaking journey begin?
I encountered Printmaking for the first time on a Foundation Course in Sheffield. During my Fine Art BA in Leeds I became more involved with painting and sculpture and rather regretted that I hadn’t spent more time in the printmaking department. I moved south to be as close to London as I could (afford) which was Croydon. Croydon had a marvelous art college and an amazing Printmaking department run by Denis Masi (who later left to run printmaking at the Slade). He and his staff were most inspiring teachers. My Postgraduate time there also coincided with a memorable exhibition held at the British Museum ‘The print in Germany’; I was blown away by that show and that was a turning point for me – I devoted myself to printmaking and painting took the ‘back seat’ for many years after. 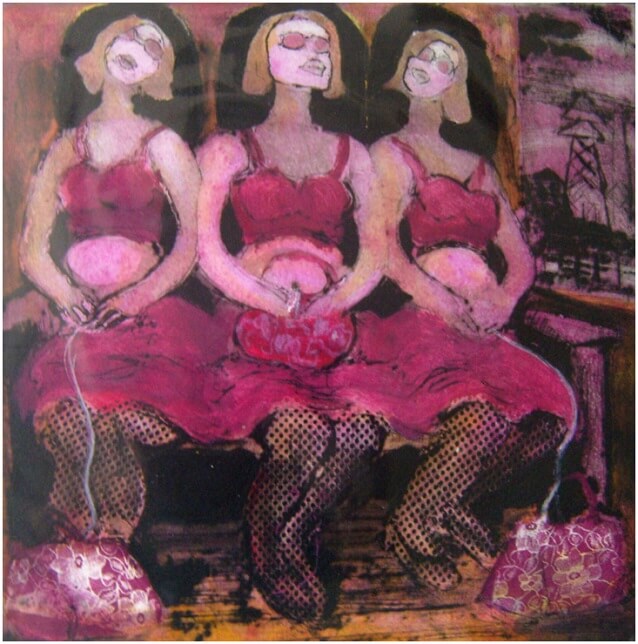 Were you artistic as a child?
Yes I was always very artistic – I drew all the time. My mother used to set my sisters and I ‘rainy day ‘ projects – she encouraged us to make greeting cards for all the usual occasions for family and friends. Our kitchen was a bit of an art gallery – our drawings taped to every cupboard door. After a while these would inevitably become rather tatty and turn yellow round the edges from the sun so my Mother would be chasing us for replacements. At school Art was my strength and saviour because I really struggled academically.

How would you describe your signature style?
Style is usually something that is used to describe artists’ work by someone other than the artists themselves such as an art critic. I was always only interested in drawing the figure and I gradually developed a so-called narrative ‘expressionist’ style through the process of printmaking. I was/ am always attracted to dark strong black lines, dramatic light, composition and colour. Before I was really fully aware of the German Expressionist Printmaking group, my body of work was often described by gallery owners, enthusiasts and art educators etc. as; ‘Expressionist’ and ‘Germanic’. 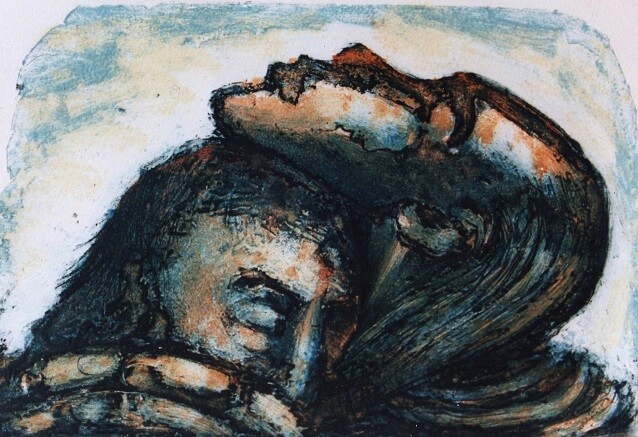 What key themes underpin your work?
People are the subjects of my work and I am intrigued by moments that despite initially appearing quite commonplace, are (for me) charged with great significance and meaning. My inspiration is drawn from experiences or predicaments I encounter in daily life, such as social gatherings, images from social media and words from a song or a poem. All these generate ideas for themes that I can build upon, “dress-up” and weave into my work. 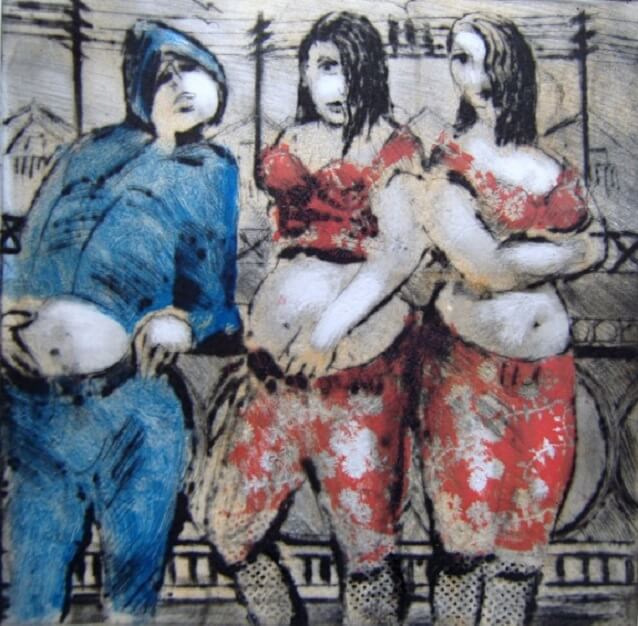 Can you tell us a bit about the techniques you use in your printmaking?
I like to approach a print spontaneously and work directly on a plate as I would a drawing or painting. I use many different methods. I often work loosely with a brush initially to ‘feel my way’ into the composition. When I work with an etching on a metal plate I will make the initial drawing marks with the ‘Sugarlift’ technique and add aquatints and the deeper etched or dry pointed lines later. More recently I have been working with carborundum collagraphs. This is a technique where a mix of acrylic medium and carborundum grit are painted on to the surface of a plate which is then inked as an intaglio/etching plate. The raised texture it provides typically gives deep velvety tones, rich colour and texture that embosses into the paper. It is a very direct, versatile and painterly way of working, which I love. Tonal variation can be controlled using different grades of grit such as fine, medium and coarse. I often add textures and impressions from fabric patterns or embossed papers onto the plate surface. To add colour, I either ink a plate then roll or dab on layers of colour and print it in one go or I might create a separate plates and print one over the other ie; – one for colour and pattern and the other for the darker defined drawn elements. I experiment with different combinations until I get the effect I’m trying to achieve. I love the alchemy of printmaking –I encounter many frustrations in the pursuit of ‘getting it to work ‘. I must say, however, it is during this process I always encounter a ‘wow’ moment or a surprise discovery that leads to a new idea for a future work. 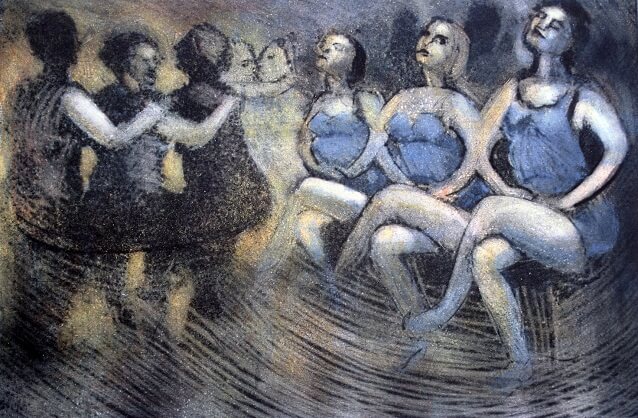 You work in multiple media – how do you decided whether a subject will become a print or a painting?
Since I moved from the UK to Chicago in 2010, I have been able to expand my work in both printmaking and painting – often combining elements of both in one piece. To develop a painting or drawing I use my prints as the starting point, which are often worked into a painting using collage and printed impressions from fabrics and embossed papers. I then use printmaking tools, such as rollers, squeegees and scrapers, to apply paint.

How much do you work from memory, observation, photos or sketches?
My subjects and the realms they inhabit are all entirely conjured from my mind’s eye. I may refer to a photograph, an object or use my own reflection for additional information such as working out an angle for a head or proportions etc. None of my works are of anyone in particular. I compose figures either in groupings or as a single figure or just a face. My aim is not to create exact likenesses, but rather to create prototypical or archetypal figures whose personality or identity is both partly exposed and partly hidden beneath the surface. It is through my printed, painted or sculpted figures that I wish to project recognizable aspects of human experience. 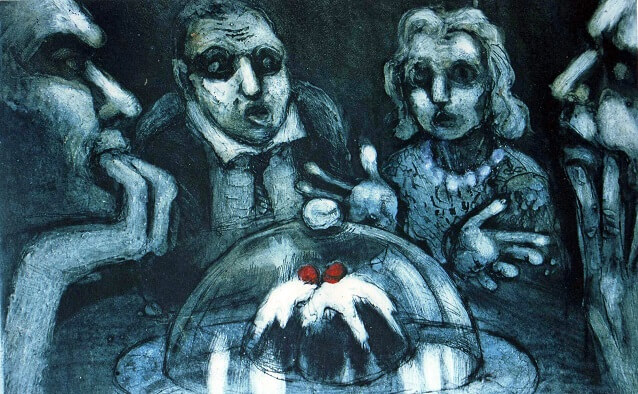 Can you describe a typical day?
It is difficult to describe one typical day. During summer, when I can, I cycle along the lake Michigan to my studio at the Zhou B (approx. 5 miles) and head home before it goes dark – it’s a gorgeous ride! (Too cold to cycle there in winter though) Otherwise, I typically take the train followed by a walk. I bring a ‘packed lunch’ and work alone either on a painting or a print. I may have a break / chat with another artist neighbour during the day. I pack in the hours and head home in the evening. Another typical day would be either cycling or taking the bus in the morning to another Art center/ education center that offers various workshop facilities. I use an open Ceramic workshop they have there to work on my sculptures until 7–8 pm.

How long do you spend on a work?
I work on several pieces at once in various mediums and in stages so I cannot say how long I typically spend on one work. Very occasionally I might finish something within a day. 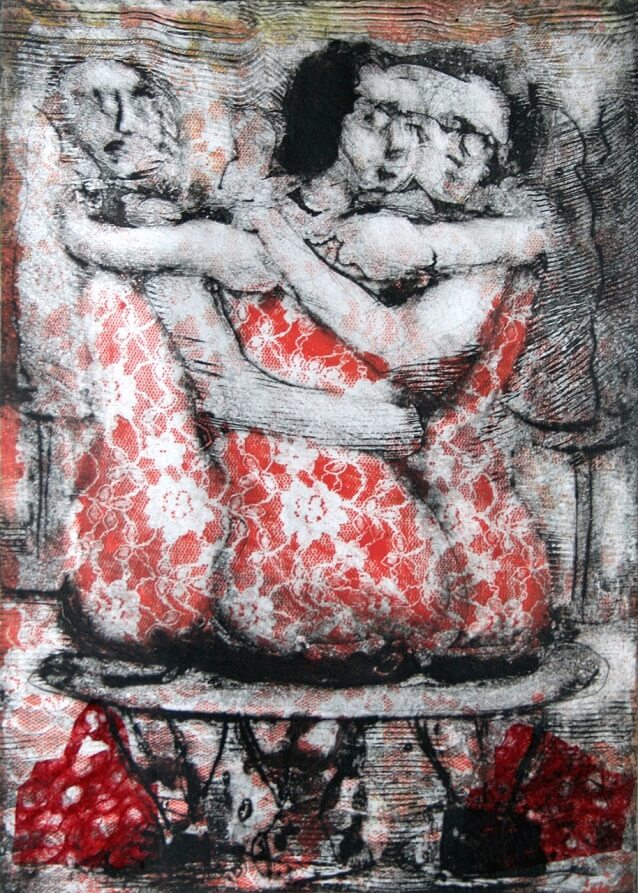 A lot of your work features people – women in particular – what draws you to this as a subject?
I became interested in exploring the complex relationships that are formed between teenage girls and young women. This theme initially grew out of my daughter’s numerous recounted stories and snatches of conversations overheard from her school and college days experiences. Teenage street culture and a media obsessed with image, gossip, fashion, and the minutiae of celebrity life further enriched this theme.

We often see the women in groups – particularly in groups of three – what is about relationships and the dynamics between people that interest you?
First women and girls is a subject I’m most familiar with apart from the obvious reason (being female myself) I grew up in female dominated household. Also, much later I experienced living opposite a secondary school in SW London I would often see groups of friends and girls arms linked in threes. I recalled that I experienced similar ‘threesome friendships’ when I was a similar age. Despite that being the first inspiration behind these groupings; three is also important number in creating a dynamic scenario. The conversation between two can be guarded and controlled, by adding one more creates edginess to the suggested narrative, and this hopefully draws the viewer in.

Some of the images are very intimate and raw e.g. the brushing of hair. Can you tell us a bit about this?
This series began when I found myself brushing my young daughter’s long tangled hair each morning and repeating exactly the same words my mother would say to me whilst brushing my similarly long hair. “Not today”, “No you can’t wear it loose for school”, “No you can’t have that hairstyle today” etc. These images are about how complex emotions, power struggles and tension between a mother & daughter can develop during a simple daily routine. I developed the metaphor of the mother ‘playing her own tune’ vigorously on her daughter’s hair as if playing a cello – oblivious to her daughter who becomes more and more like the instrument. 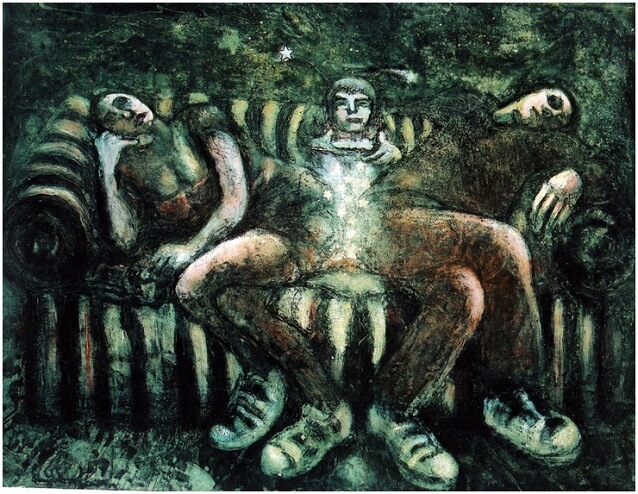 What impact has moving from England to Chicago had on your work?
Moving to Chicago has had a huge impact on my work. Our first very new experience was living downtown in a high Rise apartment surrounded by other apartments and the hustle and bustle of people everywhere has definitely impacted my work. Also I was very lucky and I immediately found myself a studio that is way bigger than anything I have worked in before. It meant I could install my printing press there allowing me me to practice my printing and painting in one place. I was offered my first solo show here in Chicago in the main Zhou B Art Center gallery which is huge. I had enough work to put on a good show but even my largest paintings (4ft x 5ft) looked rather small in the space. The Curator challenged me to try and create at least one large piece (approx. 8ft x 9ft) high, which I was excited to try. It was a liberating experience and I enjoyed and learnt so much in the process – I got rather hooked on working large scale.

I also applied for a special program called the Center Program, which is aligned, to the University of Chicago. It offered an opportunity to develop work, receive feedback from professionals in the field and work toward an exhibition to be held in the Art’s center’s main gallery. Over the course of six months, a supportive peer network, guest artists, gallerists, critics and professionals pushed us to answer tough questions, evolve our art and ultimately produce strong new work to show. It was during this time during this residency that that I found myself in the Ceramic department and handling clay. It was amazing to find how at home I was with this medium. It became the feature of my show from this course and I have enjoyed working with this since. People often recognize and comment on the strong bond between my work in printmaking, painting and now sculpture.

To see more of Corinna Button’s work you can visit her page here.

Elected RE (Royal Society of Painters and Printmakers) Button is originally from Sheffield; She earned her BA Honours in Fine Art from Leeds…
Read more about Corinna Button