The Classroom Suite by Peter Blake

The Classroom Suite is a series of four silkscreen prints by Peter Blake depicting different popular leisure activities: the beach, the circus, the aquarium and a parade.  The Classroom Suite is inspired by posters and images created for children and used in the classrooms and nurseries of yesteryear. Their packed compositions reflect the fact that these posters were designed so that children could gaze at them repeatedly and find different details to capture their attention. Though Sir Peter’s latest works are very different from the pop art style for which he is most well-known, they do contain an essential element of pop art doctrine: nostalgia. Blake combines childhood nostalgia (a theme that recurs in his work throughout his career), his love for collage and his penchant for surreal juxtapositions to create a series of images that are at once comforting, comedic, witty, evocative and surprising. 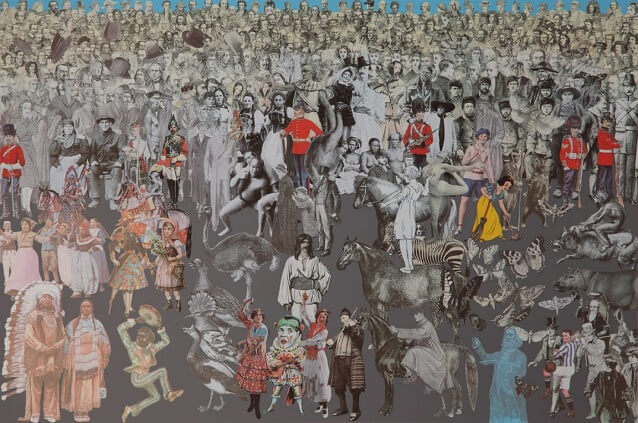 The density of figures that populate Another Parade provides almost endless interest for the eyes, and also shows Blake’s skill at marshalling his huge cast of characters. Finding a compositional balance in a picture space that contains figures and animals but absolutely nothing else; no reference points like buildings or trees, no sense of perspective, is extremely difficult. Blake differentiates between the participants of the parade and the watching crowd by suggesting a road/street surface with his use of a grey background. He also creates points of interest through his placing of coloured figures across the composition. This draws the eye to particular spots in the picture and stops the monochrome figures from merging into each other. 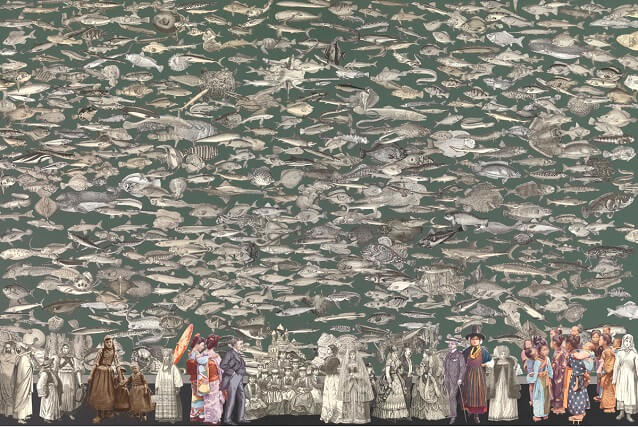 Every single little fish (of which there must be hundreds in this piece) were cut-out from old reference and fishing books by hand. Sir Peter describes these “cutting” sessions as his relaxation time; he doesn’t consider it work. This attention to minute detail leads one to imagine that Sir Peter has a touch of OCD, so stringent is his perfectionism. The result was a visually arresting collage from which this silkscreen has been created. (Peter says that he still has plenty of fish left for cutting-out). Aquarium is so densely packed with fish it appears almost pattern-like, it could be an incredibly intricate wallpaper. 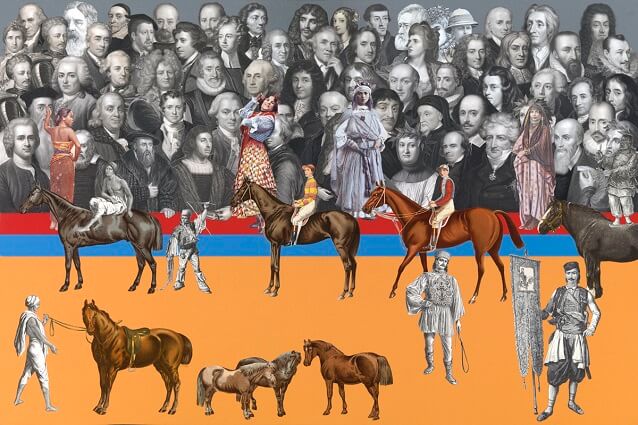 The Circus has been a major subject for Blake’s art; he made a circus poster as early as 1949 and some of his earliest collages of the 1950s were based on the theme. Here Blake revisits those early works (such as Jockey Act and Bird Act from 1957), we can see the same use of a double-coloured line to represent the wall between crowd and performance arena, and the same use of collaged illustrated-figures to make up the crowd. This pattern of subject matter recurring allows us to track the impact Blake’s changing perspective as he ages, his investigation of new techniques and stylistic solutions. 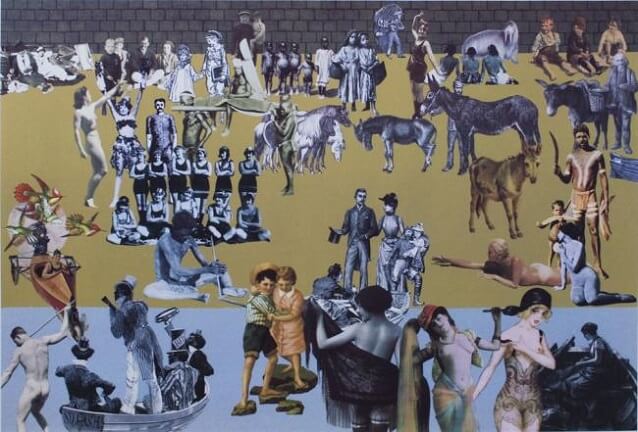 To see more work by Peter Blake visit our page of his prints here.